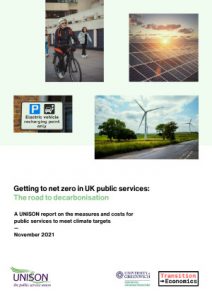 The report was highlighted at National Delegate Conference in June, UNISON Scotland Convener Lilian Macer praised the report and called for urgent action on the climate crisis.

Depute Convener Stephen Smellie said it is the biggest crisis we have ever faced; that like the crises of COVID and the cost of living, which it underpins, the climate crisis has the same roots of “an economic system based on profit, that seeks to exploit all natural resources and workers for the benefit of the few, with no regard to the consequences.”

The motion was passed unanimously and included measures for all branches to elect green representatives who will support the development of a green bargaining and negotiating agenda within their workplaces and communities now starting to suffer the effects of the Climate Emergency Crisis. 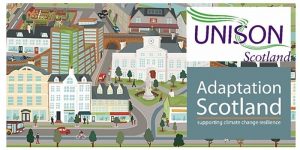 Online resources
The following online resources are essential tools for helping all UNISON reps deal with the extreme weather events we are all now facing as part of our daily work routines in all seasons of the year.

The following resources are really helpful for getting a better understanding of the Climate Emergency Crisis and what trade unions are doing to promote a just transition for a fairer, more equitable climate resilient society.

Big Oil vs the World tells the 40 year story of how the oil industry delayed action on climate change – Media Centre (bbc.com)

Finally Climate Camp Scotland comes to Aberdeen the last weekend in July so why not dip your toe in the water and chat to the climate activists at the camp this weekend. https://www.climatecampscotland.com/program-1