The branch is deeply saddened to announce the death of Bob Revie, former branch secretary of Aberdeenshire UNISON and well-known activist across UNISON and its predecessor union, Nalgo.

Although retired for some years, Bob will be well known to many in UNISON and the trade union movement. His funeral will be held on Friday 27 January at 11.30am at Moray Crematorium, Broadley, Clochan, Buckie AB56 5HQ. 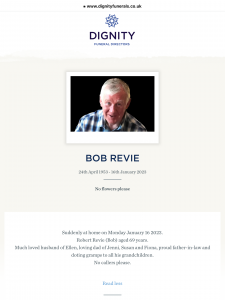 Bob was a leading light in NALGO and was instrumental in the foundation of UNISON as an organisation, being part of the initial NEC, national executive council, which formed what we know today.

Bob also served for many years on the Standing Orders Committee for National Delegate Conference, where he was hugely well respected. This role appealed to his attention to detail, or the “anorak” in him, as we would affectionately refer to it.

He was Branch Secretary of Aberdeenshire UNISON for countless years and showed us all how things should be done. It is thanks to him that Aberdeenshire UNISON is well regarded nationally and that we have the strength to both represent locally and as equals within the national structures.

Bob was vice chair of the Local Government Committee for many years, often chairing conferences in a firm and fair manner, with some notable use of words that could leave us all sniggering like school kids. He retired just over 10 years ago with hopes to support people with his knowledge of employment law but alas ill health dogged his retirement. He was an active retired member, even if he couldn’t travel to meetings, offering sage advice and his wisdom. Always there with a listening ear.

He will be very sadly missed by his UNISON family.

Our thoughts go out to Ellen his wife, his daughters and his grandchildren.

Sleep well Bob! From all your friends at Aberdeenshire UNISON