The theme of the of the celebration was: “Black lives matter in a hostile environment”. Chaired by Benson, the keynote speakers were Dr Davena Rankin, Kebba Manneh, Rakiya  Suleiman and Lewis Macdonald MSP.

Benson said, “All those participating were challenged to answer the fundamental question as to what BHM means to them in Scotland. They expressed a common view that any form of racism and unjust treatment should be got rid of because they are inhumane, and they make communities unsafe and hostile.”

Davena Rankin, a member of UNISON’s National Higher Education Committee and National Executive Council, spoke on how systematic and institutional racism has discriminated against black people in work and higher education.

She said “Black History Month allows everyone to stop and reflect on the continuing impact that the legacy of slavery has on modern day society. Myths that were developed to justify the inhumane treatment of slaves continue to this day.

“The disproportionate impact of COVID-19 on Black lives means that it is vitally important that we challenge institutional racism in health and education to make sure that Black people don’t continue to pay the price of discrimination with their lives.”

Kebba said, “Racism is the by-product of slavery and colonial prosperity, and today, we now know that the wealth of our cities such as London, Liverpool, Bristol, Glasgow, Cardiff, to name but just a few are built on the back of the Slave Trade.

“For some, these facts can be difficult to hear and accept but the key to change is through education. Therefore, it is about time these historical truths are taught in our schools and colleges to address systemic, institutional and structural racism so that those who do not know, those who wish to ignore or deny the truth, can fully understand why and how Black people are present in all corners of the United Kingdom.”

Rakiya Suleiman is the Chairperson of the Scottish Black Members Committee and Vice Chair of UNISON National Black Members Committee. In her presentation, she said that as a child her mother had taught her that there is only one human race. She told the meeting that black or white is a political terminology.

“Racism”, she said, “is learned”. She called on all of us to do our bit to challenge racism whether direct or indirect, for a more equal, more inclusive society.

Lewis Macdonald, MSP for Aberdeen and the North East spoke of his childhood on the Western Isles and the discrimination he witnessed when gaelic speaking people were not allowed their own language.

He had studied African history at university because of the importance of aural history, “something which is also true of my own heritage in the Western Isles of Scotland.

“Those who are denied literacy in their own language keep their history in their heads, and the aural history of Africa and of people of African descent is rich indeed,” said Lewis.

He called for local young people to know more about the relationship between Aberdeen and Africa.

“The challenge for Aberdeen and Aberdeenshire today is to address and overcome structural discrimination, which denies jobs and opportunities to so many people on the grounds of the colour of their skin, and prevents the wider community from benefiting from the talents and abilities of all our fellow citizens to the full.

“That is a challenge we should work together to meet, and celebrating Black History Month is a good place to start.” 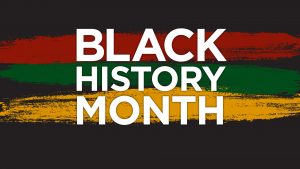 Since then, it has become an annual celebration of contributions and achievements by African-American people and has played a crucial role in US history.

Today, this annual observance has received official recognition across USA and European nations including UK where black people have contributed massively since slave trade in the 15th century. Yet, black people despite their contribution,  continue to suffer racism, discrimination mistreatment, and unjustly treated in communities and work places. Black people are contesting such hostile environment by raising their “one voice” to their tormentors and those in authorities that their lives matter the same  as everyone else’s because there is only one human race and racism based on the colour of ones’ skin is out of place.