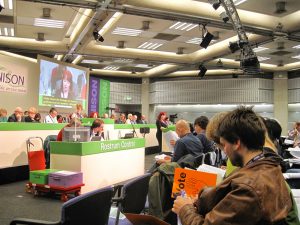 Branch officers played a key role as UNISON local government delegates from across the UK met at a special conference in London.

The conference was called primarily to debate the lessons of the recent pay campaign in England and Wales and agree a set of strong proposals to increase member engagement and democratic participation in every aspect of future pay campaigns. However Scotland had an important part to play as we shared the lessons from our own pay campaign.

Delegates backed two motions from Scotland. The first called for our bargaining and industrial strategies for fair pay to be allied with a consistent, sustained and coherent political strategy, aimed at addressing the “30 years trends of suppressing wages…” 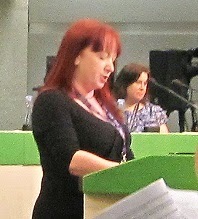 Moving the motion, Branch Secretary Inez Teece, in her role as Regional Delegate, said, “Local government pay has not been a political priority for recent governments in fact the contrary, there has been deliberate attempts to drive down pay and to devalue the work, the vital work that we all do.

“Often it is our members that are believing the rhetoric that there is no other way and to just accept the hand we are dealt and that we are not worth it.

She told conference that in Scotland we have adopted an industrial action strategy that has political lobbying at the heart of everything we do seeking to influence political parties at all levels, not as a one off process but a continuing fight showing both the membership and the politicians that we mean business and that we are worth it.

“We need to ensure all elected representatives are aware of our plight but also how their decisions are affecting the services and the people that deliver those services.

“We need to build strategies that encompass political lobbying so that all politicians cannot say they didn’t know,” said Inez, calling for further development is needed to ensure a long-term project is developed, not only in Scotland but across all nations, in a consistent and coherent way, allied to our other industrial strategies alongside other unions. 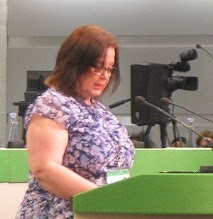 She slammed the selective application of government pay restraint policies and cuts that are ideologically driven, which has held down our wages.

“Fair pay in local government is a political issue and we will need a long term political strategy if we are going to rebuild the confidence of our members.

“Our strategy must involve engaging our members with the arguments on the alternatives to the coalition’s right wing propaganda.

“We need to attack the myths. As long as people continue to buy into the myth that taking a pay cut will save jobs and services, the government and the employers will continue to cut pay and conditions.

“And to succeed we will need to win the support of politicians at all levels for a new vision of local government that places a well rewarded workforce at the heart of public services.”

The conference also backed Scotland’s second motion calling for future campaigns to ensure lay involvement in pay negotiations, something that we already have in our Scottish structures, and to increase member participation and engagement in the fight for fair pay.

It called for more joined up working with the other trade unions based on a set of agreed principles, strategies and timescales.

During a day of impassioned speeches and strong feelings about the impact of the government’s continuing pay freeze and years of declining pay in local government, a range of composites and motions were agreed. These pledged the union to ensuring a UK-wide perspective on all pay campaigning; to put women and gender equality at the heart of campaigning; to work jointly with other unions and to build bargaining and industrial strength through a massive recruitment and organising effort.

Your branch delegates were Kate Ramsden and Steve Gray.