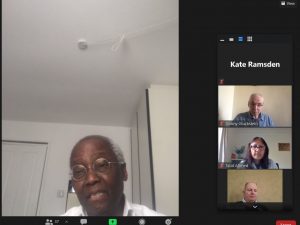 The branch hosted a very successful and well-attended online event, “Fighting Racism in the Workplace” on the eve of UN Anti-racism Day.

Wilf told the meeting that systemic racism is how the powerful maintain their position in society. By keeping asylum seekers locked up in barracks; through Priti Patel (Home Secretary) saying Black Lives Matters is dreadful; by turning people who challenge injustice into the enemy by calling them the woke agenda; through the new Policing Bill which is banning meaningful protest; and through the persecution of the travelling community.

He warned of an appeal to racism by politicians on the right to get votes against a “construction” of the black community as getting too much privilege.

“It is the politics of fear”, said Wilf. “The agenda is that we just have to do what are told, and accept bad conditions.  For some people, racism allows them to become millionaires.  For some people who run the world, justice and equality is the last thing they want”

“We need people to actively stand up against racism – we are the majority. When we struggle we make progress through legislation and changing the culture.”

He called on us to be organised and active in our unions to make us strong and to make change happen.  “We have to work out what solutions we want to see, and get unions to negotiate for that.” 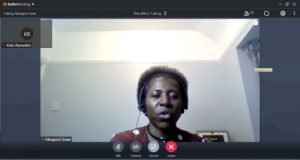 Margaret spoke about the Black Lives Movement and how that had signalled an awakening which engaged young people in particular.

“One thing you can do is call out racism. Be brave.

“It’s only by their self-reflection that they will start to change their thinking and behaviour.  But talk about the behaviour, not the person.”