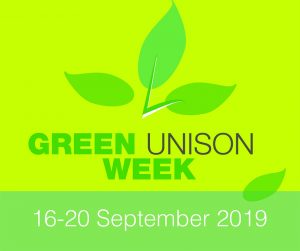 Branch activists will be supporting the Aberdeen Climate Strike on Friday September, as part of Green UNISON Week from 16-20 September.

Hosted by the Aberdeen Student Climate Network, the event will be held from 10-2pm at Marischal College, Aberdeen and promises to be a lively affair. We are encouraging as many branch members as possible to come along. Click here for more information and join us if you can.

Throughout the week, branch stewards will also be coming round workplaces with pledge cards asking members to pledge to do their bit to support the school climate strikers and to tackle climate change.

Branch co-chair, Steve Gray said, “Following the increasingly scary news in 2019 about the Arctic ice loss accelerating many fold and the mass burning of rainforests in Amazonia, Africa and Australia, UNISON is asking stewards and members to look outwith the workplace and offer support to the school climate change strikers and the international day of climate change action on Friday 20th September.

“The UNISON Scotland weblink gives a range of ideas for what we as stewards and our members can do between the 16th and 20th September to make a change for the better in the climate change emergency we find ourselves.

“We are asking our stewards to try and get as many pledge cards signed as possible or to make pledges on twitter as described on the online guidance.”

This website uses cookies to improve your experience while you navigate through the website. Out of these, the cookies that are categorized as necessary are stored on your browser as they are essential for the working of basic functionalities of the website. We also use third-party cookies that help us analyze and understand how you use this website. These cookies will be stored in your browser only with your consent. You also have the option to opt-out of these cookies. But opting out of some of these cookies may affect your browsing experience.
Necessary Always Enabled

Any cookies that may not be particularly necessary for the website to function and is used specifically to collect user personal data via analytics, ads, other embedded contents are termed as non-necessary cookies. It is mandatory to procure user consent prior to running these cookies on your website.