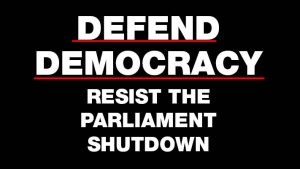 The branch is calling on all our members and their families and friends to join the demonstration on Saturday 31st August at 12 noon in the Castlegate in Aberdeen, to defend our democracy and resist the shutdown of our parliament.

Commenting on the Prime Minister’s plan for an extended suspension of Parliament, UNISON general secretary Dave Prentis said:  “This outrageous manoeuvre has been made to silence all opposition in the most dictatorial way. Our parliamentary democracy is the envy of the world, but it’s being stamped upon and disregarded by a Prime Minister who’s not gone near a public vote.”

“Boris Johnson is treating the future of the UK like the plot of a far-fetched political TV drama. The country must be asked for its view on Brexit right now. That’s the only way.”

“He is setting a timebomb for the NHS. The promises of more cash for the health service made during the referendum were just empty words. No deal will instead leave the NHS gasping for breath, creating chaos for the hard-working staff and spelling potential disaster for patients.”