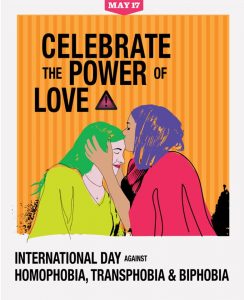 Branch treasurer and LGBT+ ally, Ann Gray celebrates International Day Against Homophobia, Transphobia and Biphobia by looking back at how far we have come, how far we yer have to go and how you can get involved.

1990 was a busy year. The Hubble telescope was launched, Margaret Thatcher resigned as Prime Minister of the United Kingdom and J.K. Rowling began writing Harry Potter and the Philosophers Stone. It was also the year that saw, on May 17th, the removal of homosexuality from the World Health Organisations International Classification of Diseases.

30 years later, the significance of this event and day continues to be a focal point for celebration and activism across the globe. From the first International Day Against Homophobia on May 17th 2005, the movement has continued to grow and develop but always with one clear vision: freedom and equality for all sexual, gender and bodily minorities.

May 17 activities have ranged from large scale parades and festivals to bike rides and movie nights, reflecting the diversity of social, religious, cultural and political contexts in which LGBT rights violations occur. We can see that May 17 activism has had a positive impact on equality legislation across the world, as governments have used the date to mark their own equality progress. For example, France used the day in 2009 to become the first country in the world to officially remove transgender issues from its list of mental illnesses, and Taiwan became the first country in Asia to pass legislation legally recognizing same sex marriage on May 17th 2019.

Although there have been many positive steps toward equality, there is still so much more to be done. In fact, same sex acts are still illegal in 37 of the 130 countries which celebrate May 17. This day provides an opportunity to raise awareness of violence, discrimination and repression of our LGBT sisters and brothers across the world, and to engage in dialogue with media, policy makers and the wider society to effect real change and take the steps needed to make equality a reality.

So, how can you get involved?

Despite the unprecedented circumstances we find ourselves in, there are still plenty of opportunities for you to get involved in May 17 2020 ‘Breaking the Silence’. Events and activities on all continents can be found through the link at the bottom of this page, including an LGBTI World Tour organised by LGBT Scotland, which will take you on a tour of LGBTI people and their lives. There is also plenty of inspiration and ideas for planning your own activities, so get creative and be sure to share them with us!

Now more than ever it is vital that we stand together and for each other. Solidarity always.