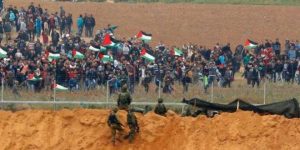 Aberdeenshire branch is calling on our members to attend the protest against the killings and maiming of unarmed Palestinian protesters in Gaza by the Israeli Defence Force and to call for an end to Israeli war crimes.

The protest will be held on Sunday 20th May 1-2.30pm outside Ross Thompson MP’s office, 192 Holburn Street, Aberdeen. Click here for details

Branch communications officer, Kate Ramsden will be speaking at the protest and calling for an end to the UK’s arms trade with Israel and for the Boycott, Divestment and Sanctions campaign against Israel to be widened out.

Kate said, “We are greatly saddened by the high loss of life and further mass casualties in Gaza and we utterly condemn the shooting of unarmed protesters at the Gazan border by Israeli forces.

“There can be no justification for the shooting of unarmed civilians exercising their right to peaceful protest, especially the killing and maiming of children. Israel is in breach of international law and the international community must hold them to account.”

UNISON  General Secretary Dave Prentis said, “One of the most valued traditions in our movement is peaceful protest.

“On Saturday our union marched through the streets of London to call for change. We did not face physical attack nor did we fear it. We certainly didn’t have to fear the use of live ammunition, snipers or soldiers firing indiscriminately into the crowd.

“Yet only two days later, such slaughter was wreaked upon another peaceful protest in Gaza.

“UNISON condemns the brutal massacre of 58 Palestinian protestors and injury to over 2,700 more, near Gaza’s border with Israel. Since the end of March approximately 100 protestors have been killed by the Israeli army and more than 12,000 injured.

“At times of such horror and slaughter, the purpose of peaceful demonstration can often be lost. Yet it is vital we combine anger at these senseless killings with our support for the cause that brought the protesters out in the first place.”

Click here to donate to Medical Aid for Palestine