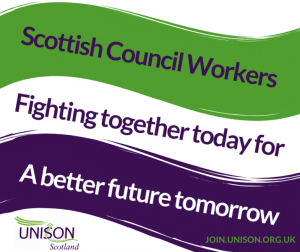 The branch has demanded that discussions on the reopening of schools must involve unions like UNISON, representing school support staff, as well as just teaching unions.

Hundreds of members contacted the branch following on from the First Minister’s announcement on 21st May that the plan is for schools to reopen on 11th August. They had learned about the Aberdeenshire plans from a letter issued to parents and posted on social media.

Inez Kirk, branch secretary has demanded urgent discussions so that the majority of staff affected by the return to school have a voice in the negotiations and do not just hear about it from a letter sent to families. She called on Laurence Findlay, Director of Education and Children’s Services, to ensure that all the workforce is represented within the planning and working groups.

In an email to Laurence Findlay, Inez pointed out that local government trade unions rather than teaching  unions actually have the majority of members employed in education, whether in Early Years, teaching support or support services that enable a school to run and teachers to teach.

Inez said, “The email and phone has been red hot today and our members are asking many many questions.

“This extract below from one of the emails clearly indicates decisions have been made and communications have been sent to families, yet ourselves and our members are left playing catch up.

“We have just been issued with a letter that has been sent to parents regarding when the Schools will be reopening in August; Monday  11th August 2020. This was issued by Laurence Findlay, Education and Children’s Services. This information has not been discussed with staff yet.”

The Director has responded and agreed that a mechanism is needed for regular engagement and active involvement from non-teaching trade union colleagues, particularly in the next phase.

Inez has called for discussions to take place as a matter of urgency and has condemned the announcement to the public and families without any discussion whatsoever with the staff that will be affected or their trade union.

“We have also made it clear that there is no agreement to change any contracts of our members so communication and negotiations are going to have to take place.

“Once again, it seems that decisions have been taken some time ago involving the teaching unions, whilst the support staff unions were left in the dark.

“This has major implications for the terms and conditions of our members many of whom have already been working hard in the hubs to care for the children of key workers and the most vulnerable.

“And now a public announcement by their employer that schools will reopen without even having the courtesy to speak to their reps or themselves first.”