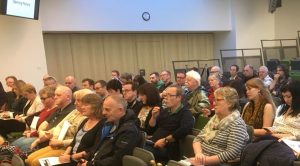 Within that, public service trade unions like UNISON, Unite, GMB, EIS, PCS and CWU will run their own campaigns but will come together in collective actions to put pressure on the Governments at Westminster and Holyrood for proper funding and decent pay.

The overall campaign will include an organising and political strategy to get the messages out there to our members, the public and the politicians that our public services must be properly funded and supported, and that the money is out there to do it. It’s a matter of political choice.

Workshops looked at the role that the Fair Work framework can play in negotiating decent public services and the importance of getting the message across through local networks and alliances. It also recognised the importance of collective bargaining and collective union action for political lobbying and industrial action. 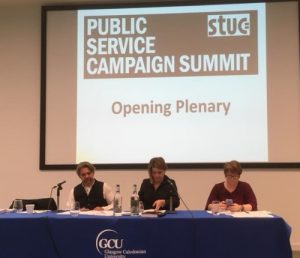 Kate said, “Well delivered and high quality public services are a mark of a civilised society. They are key to protecting and supporting our most vulnerable citizens, but everyone benefits from good public services.

“What is often missed though is that they are also essential to a thriving economy. Pay workers decent wages and not only will that add to the tax take, these workers will also spend more in their local economies.

“It’s no coincidence that we’ve seen local shops and businesses go to the wall as public service jobs have been cut. UNISON always said that for every public service job to be cut – and they have gone in the tens of thousands – a private sector job will go too. We are seeing the terrible impact of this.

“Unemployment may be at a low, but decently paid jobs have been replaced by low paid, insecure, part-time jobs often on zero hours contracts.”

Kate added, “Lots of public service jobs have been outsourced to private companies who pay less with poorer training, support and terms and conditions. These jobs include jobs in catering and the care of our most vulnerable like home care. Where the profit motive drives public services the quality inevitably goes down.”

UNISON has already launched our Pay Up Now! Campaign and our branch will be campaigning to highlight the impact of poor pay on our workers and on our local economies and to call for an end to pay restraint and action to restore the 15% or so that we have lost in real terms over the past 7 years.”

Kate warned, “Aberdeenshire is seen as a well off part of Scotland but foodbanks are growing with more and more people unable to make ends meet and most of our workers squeezed.