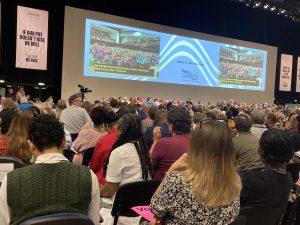 This was our first in-person conference for three years because of the COVID pandemic.

The Local Government Service Group Conference was held the two days prior to NDC.

Your delegates were: Jackie Roy, Audrey McCabe, Ann Gray and Inez Kirk. Ann and Jackie were also delegates to the Local Government Service Group Conference while Inez was the Regional delegate.

Also at Conference was Kathleen Kennedy on behalf of National Disabled Members Committee (NDMC), and Kate Ramsden as part of the National Executive Council (NEC)

The branch’s motion “Support low paid women to be active in our union” was debated as part of a composite motion. Audrey spoke to this composite. You can see the report of the debate here.

Audrey called on the union to keep women’s issues to the fore.

“And the only way to do that is to make sure that low paid women are properly represented in ALL the structures of our union,” urged Audrey.

Kathleen moved a motion on behalf of NDMC calling for a full independent review of the Equality Act 2010. You can see the report of the debate here

This was backed by conference who agreed it must involve meaningful consultation with disabled people. It should also consider whether there are other groups, such as carers, who need to be offered additional protection.

Kathleen called on the NEC to work with the NDMC and Labour Link to campaign for an independent review of the Equality Act with real consultation with disabled people and other stakeholders.

Conference report
Together we rise

It was great to be back at conference in person. To be in the hall to hear the debates and to feel the power of the collective as we stand together and get behind the issues that are so important to our members in these incredibly difficult times that we are living in.

And what an interesting conference it was. Full of highs and lows.

The highs – the barnstorming and inspiring speech from our first woman general secretary, Christina McAnea, urging us all to take a message of hope back to our branches, activists and members to recruit and organise.

Especially relevant to us in Scotland where we are engaged in a local government pay ballot, below inflation pay offers in Health and further education, pensions disputes and more.

The speakers – haven’t the debates been great? Some were even contentious and all were passionate and inspirational.

A real focus on women’s issues – after all, our union is three quarters women – and a strong focus on other equalities issue. Given that equalities is at the core of everything we do, this is just as it should be. Our branch was to the fore in this, from our own motion which Audrey spoke to, to our Equalities Coordinator, Kathleen moving the motion on the Equality Act.

And of course, the impact on our members of the soaring prices of food and fuel – the cost of living crisis – permeated every debate. The terrible impact on all of us, but especially our lowest paid members, our Black members, our disabled members and our LGBT+ members –  of life under a Tory government.

In one of the six richest countries in the world it is despicable that we have people that can’t afford to eat and heat their home, at the same time as the richest have massively increased their wealth. Conference was united in its pledge to fight for our members livelihoods through bargaining on pay and for proper funding for public services; to engage with our members and to campaign for action by this government to tackle inequality and to invest in public services.

Our international speaker from Turkey, Mehmet Bozgeyik from KESK, the Turkish public sector union confederation, gave an uplifting speech to delegates which highlighted the huge challenges faced by trade unionists in Turkey, where it is actively dangerous to be a trade union leader.

Delegates showed our support for jailed co-chair of the Turkish Health union, Gonul Erden, imprisoned for her trade union activities, and demanded her release.

….And then the lows – the motions passed criticising the actions of the NEC. Excellent debate, restating clearly the principle of the sovereignty of conference, but sad that it had to come to that. An instruction to the NEC to reverse decisions taken that were perceived by some legal advice and by the majority of delegates, to breach UNISON rules. And a vote of no confidence in the NEC.

NEC members representing Scotland’s statement on this matter is below.

But overall, I think most will agree that it’s been a pleasure to be back together and has inspired us to go back to our branches, as Christina urged, with our messages of hope.

To quote Christina again, “We can be strong, we can be resolute. Together we rise.”

Conference this week passed a motion of no confidence in the NEC. This is unprecedented and there is no guidance and no rule to say what should happen next.

As Scottish NEC members we take this very seriously and regret that things have come to this.

However, we believe that suggestions that the entire NEC should resign are inappropriate. NEC
members are elected by members and members will be able to elect a new NEC in a few short
months.

The NEC needs to fully reflect on the vote of no confidence, and all the criticisms and actions called for in the motions agreed by conference.

Scottish NEC members will argue for that both immediately and when the NEC meets in July.

We will report back to Scottish members and branches in full as soon as we can.