Aberdeenshire UNISON has called for an urgent meeting after the council circulated updated Adverse Weather Arrangements Guidance without consultation with or agreement of the trade unions.

The joint trade unions had raised a number of concerns about the proposals, primarily the requirement for staff who cannot get to work or work from an alternative work base to take annual leave, a flexi or unpaid leave on the first day of adverse weather.

Inez said, “There were issues that were raised a number of times at Trade Union Liaison where we were not in agreement with these changes to this policy. We were particularly concerned about the impact on school based staff and workers unable to work from home which would generally be our lower paid female workforce in care, catering and cleaning. 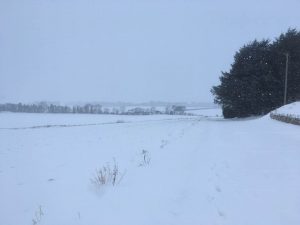 “We did discuss possible ways to mitigate situations with the roll out of ALDO and training during snow days but it seems this has not been included in the updated guidance which is very disappointing.”

She added that school based staff have no options about when to take annual leave and so are compelled, according to these changes, to take unpaid leave despite the school actually being closed.

She added that the Scottish Government charter states weather warnings and is not specific on types of weather warning or the colour it is designated.

“What is severe or mild in one area of Aberdeenshire may be very different in another part,” warned Inez, expressing concern that Aberdeenshire staff will feel compelled to travel when the Government is telling them not to “because it all hinges on the Chief Executive decision and he may unaware of the situation in all areas.

“Staff can not afford to wait for a message when they fear losing pay.

“I fear we will be in a position where people will be risking their lives to get to work when they cannot afford not to as they have no annual leave.

As a trade union we would find it unacceptable to deduct leave from the following year’s entitlement as it is essential that workers get regular breaks to ensure they can cope with their increased workloads.

“What happens if someone has to use their leave and this takes them below the statutory minimum annual leave the following year?” asked Inez.

“UNISON and the other unions are extremely unhappy about the issuing of this guidance without first the customary ’heads up’ and considering that there was no acceptance of these changes from ourselves.”