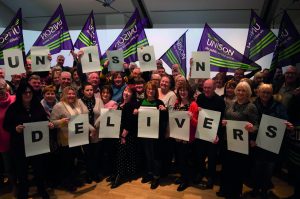 UNISON today informed COSLA that our members have overwhelmingly voted to accept the pay offer for local government workers.

The move follows the consultative ballot of UNISON Scotland local government members in which 91% voted in favour of the deal and in record numbers. UNISON’s ballot closed on Thursday 31 January.

The pay offer would deliver 9.5% cost of living increase over three years: 3.5% for 2018-19, 3% for 2019-20 and 3% for 2020-21. In addition it provides a commitment to fully consolidating the living wage, putting more money in the pockets of lower paid council workers, something UNISON has been campaigning on for years.

It also provides a commitment to re-open negotiations in the event that another local government bargaining group’s total pay offer value is revised such that it becomes greater than the sum agreed between COSLA Employers and the SJC Trade Unions for the SJC workforce for the period of the agreement. The award will be backdated to 1 April 2018.

UNISON Head of Local Government Scotland Johanna Baxter said: “This is a great outcome, delivered as a direct result of the campaigning activity and political lobbying efforts of UNISON members up and down the country. The cost of living increases meet current and projected levels of RPI and we have secured commitments to fully consolidate the living wage and maintain parity across the local government workforce. Our members have been waiting on a pay increase for over a year now so look forward to receiving their increase soon.”

UNISON vice-chair of Local Government Committee in Scotland and branch secretary, Inez Kirk said: “UNISON has campaigned hard to get the best deal we can for local government workers. While the offer does not make up for the many years of austerity, the offer, and particularly the commitment to consolidate the Living Wage, provides important safeguards for our lowest paid members.

“We will work to ensure this is properly delivered and local government workers will now receive back dated money in their pay packets in coming months.”

Notes:
– The improved pay offer has come after months of campaigning and negotiations by the SJC trades unions.
– The offer would deliver cost of living increases of 3.5% for 2018-19, 3% for 2019-20 and 3% for 2020-21. In addition it provides a commitment to fully consolidating the Living Wage and provides for negotiations to be re-opened in the event that any other local government bargaining group’s total pay offer value is revised such that it becomes greater than the sum agreed with the SJC trade unions.
– Read COSLA offer letter here: Formal SJC Pay Offer 191218
– UNISON are the largest trade union in Scottish Local Government – representing 80,000 local government workers across the
country – and the largest trade union in the UK.
Local government workers have endured a decade of austerity with job cuts, and a decade real terms pay cuts.