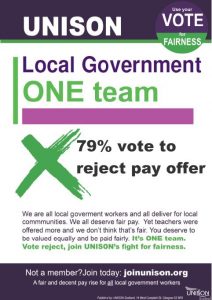 UNISON Scotland’s local government members have overwhelmingly voted to reject their employer’s (CoSLA) pay offer  of 3% for workers earning up to £80,000, and to move towards strike action in support of their claim for fair pay.

UNISON will now start to take steps towards strike action. The local government joint trade unions – who have also run consultative ballots of their members – will meet with CoSLA to inform them of the results of their ballots on Friday 9th November.

Branch secretary, Inez Kirk said, “Thank you to all members and activists who voted in the recent pay ballot and for all your hard work in getting out the vote.”

The result of the consultative ballot is:

Inez added, “We will inform the employer of these results tomorrow (9th November) and invite them to get back around the negotiating table.”

Mark Ferguson, chair of UNISON Scotland local government committee said: “UNISON members have overwhelmingly rejected the 3% pay offer. They do not think it is fair that the Scottish government found £38m extra to put into teachers’ pay, over and above their cost of living increase, but they have offered no additional money for low paid local government workers.

“UNISON will now meet other local government trade unions and employers tomorrow. If UNISON and other unions decide to move towards strike action the next step will be to hold a statutory industrial action ballot.”

Johanna Baxter, head of local government (bargaining) said: “What this result demonstrates is a real anger and frustration amongst UNISON members at the lack of action by CoSLA and the Scottish government to address the serious issue of low pay in local government.

“UNISON will talk to other local government trade unions on Friday to discuss further action and we will inform employers of the ballot results then.

“As the Scottish government prepares their budget we will put further pressure on them to make more money available to fund a decent pay rise for local government staff.  Local government workers have endured a decade of real-terms pay cuts, and they have now simply had enough.”