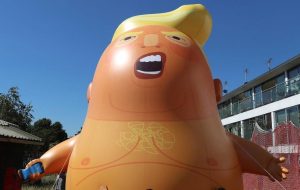 This event, entitled, “Trump’s a Chump” will be held on 14th July as part of a “carnival of resistance” across the UK. Protesters will gather at Trump International Golf Links, on the Menie Estate, Balmedie at 11am until 3pm on Saturday 14th July.

Kathleen Kennedy, ATUC President and branch equalities officer said that she expected the protest to be one of many across the UK “to make our voices heard.”

Click here to find out about anti-Trump protests in Edinburgh and Glasgow.

Kathleen added, “Since Trump became president we’ve seen a worrying roll back of human rights, most recently in the separation of young children from their parents on the Mexico border. This comes on top of the discriminatory travel ban, his reckless announcement on Jerusalem, and harmful policies on refugees, women’s rights and climate change.

“His visit to Britain will be an important opportunity to underline the importance of free speech and the right to protest, freedoms which he seems to have little time for,” added Kathleen, calling for as many people as possible to come along to add their voices to the protest.

“Bring your friends and banners and let’s make some noise,” urged Kathleen.