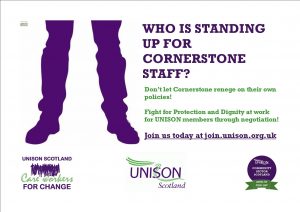 As Cornerstone members will know, the Cornerstone Chief Executive issued 2 communications on 12/11/18 in relation to the pay offer and the general relationship with UNISON. As promised we have provided a full response to those communications below. Our comments are in bold for ease of reference.

Hopefully you find this clarification helpful, and we would ask that you share this with your colleagues and encourage them to join UNISON.

Cornerstone entered into a voluntary recognition agreement with UNISON in December 1994.  The aim was to facilitate good working arrangements, recognising both parties’ common interest in furthering Cornerstone’s purpose.  Both parties declared a common objective to maintain good industrial relations.

We have become increasingly concerned and frustrated that UNISON’s approach has made the relationship with Cornerstone increasingly fractious and unproductive.

UNISON’s misinformation and hostile and uncooperative tone have caused alarm and disquiet amongst our staff and some of the people we support and their families.

UNISON’s approach has adversely affected Cornerstone’s ability to achieve its strategic and operational objectives, which is precisely the opposite of the jointly agreed purpose of the original union agreement.

We believe that an on-going relationship with a trade union is dependent on a reciprocal and participative approach being displayed by the union. Despite our efforts to promote a positive and professional working relationship, this has not been reciprocated by UNISON.

However, in a final attempt to rebuild the relationship, the Board agreed to offer to engage with UNISON under the auspices of ACAS (the Advisory, Conciliation and Arbitration Service).

During the ACAS discussions we will need to be reassured of UNISON’s ability and genuine commitment to improve and sustain a positive relationship with Cornerstone.  Should this not be attained, the Board will have no other option but to withdraw from the relationship.

If we have to withdraw from the voluntary agreement this in no way affects your rights to be a member of a trade union nor your right to have a trade union official or steward to support you on any individual matter concerning you at work.

If you get asked any questions from concerned people whom we support or families we have prepared a statement that can be shared with them.  Contact the ASC team on 0300 131 3333 for a copy.

We will be trying to host as many face to face meetings with you all as we can but if you have any questions or concerns on reading this please talk to your Branch Leader, one of the Coaches, an HR Adviser or a Cornerstone Central Lead.  Alternatively phone or email me directly and I will be happy to talk to you.

We will also be providing a Frequently Asked Questions document which will be posted on Microsoft Teams.

There will be a separate communication about the pay award for 2018/19.

At the Cornerstone Board meeting held last week the Board of Directors discussed the pay award for 2018/19 taking into account the feedback we have received from the engagement forum and from UNISON.

You will probably know by now that of those UNISON members who voted in the ballot 92% rejected the pay offer.  We don’t know how many employees the 92% represents because despite asking UNISON for the numbers they have refused to tell us.

We feel that we put forward a fair and generous offer and one that is affordable in the current climate.

Because we still have a voluntary agreement with UNISON we are bound by the collective bargaining process and this means that any pay increases due to you are on hold until the negotiating process concludes.

We are sorry but this means there will be no backdated payments in your November pay packet.  I know many of you would find this useful at Christmas time.

If you have any questions about this correspondence please ask your Branch Leader, a Coach, an HR Adviser or a member of the leadership team or email me directly.