This year’s AGM was overshadowed by the devastating and untimely loss of Branch steward and Pension’s Champion, James Mulholland, who will be known to many regular attenders of the AGM.

It was held over three separate meetings, one held in Glasgow to enable our volsec members in the central belt to attend. Despite this we failed to reach our quorum of 50 by a small margin.

Fair work framework
Our speaker, Peter Hunter, Regional Manager, (pictured above) spoke about the fair work framework which the Scottish Government has committed to and explained how we can use this to monitor whether our pay and conditions fit within the framework.

This is especially important for our lower paid members and those in the care sector but applies to us all.

A lively question and answer session followed at all three AGMs and the branch would like to extend our grateful thanks to Peter for three very well received and interesting presentations.

Resources will improve organising amongst Volsec members
The AGM approved a plan for the Branch to dedicate branch resources to support organisation and recruitment amongst our voluntary sector members. This will include appointing staff for a period of two years to undertake the work. 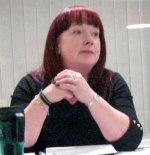 Moving the motion, Inez Kirk, Branch Secretary said, “Around 30% of Aberdeenshire branch members do not work for the council.  In addition, 11,000 workers in Aberdeenshire and Aberdeen City’s private and community social care sector are not in a union.  These workers are often poorly paid and inadequately supported.

“Only a concerted organising effort by UNISON, backed by significant resources, will change this situation.”

Inez added, “There will rarely be a better opportunity to focus on this, with the Scottish Living Wage for social care workers, the spread of the Ethical Care Charter, increased SSSC registration, and Integrated Joint Boards taking over commissioning.”

This AGM agreed in principle to support the proposal for a two-year project to organise workers in “non-core” employers, and devolved the final decision to the branch committee, to be reported to the next AGM.

“If a member is using BSL, has accent difficulty, stammers, or has other speech difficulties we believe that additional time should be approved.

“This would actively encourage people with any of these difficulties to speak at conferences. By allowing more time it brings them into equality with other members. It also gives the listener an opportunity to absorb the message and allows the speaker additional time to explain.”

This motion will now go to Scottish Council and National Delegate Conference.

Newly elected councillors must stand up for public services
The branch also pledged to fight further cuts to council services and staff by using the opportunity of the upcoming Local Government Elections to question candidates, to scrutinise manifestos and to promote votes for those candidates and parties that promote no cuts and agree to protect our valuable well being services.

Inez Kirk told the AGMs that the branch is appalled at the budget settlement for Aberdeenshire at a time when the North East of Scotland has seen the biggest downturn in the oil industry and its suppliers.

“Unemployment rate in Aberdeen and Aberdeenshire has doubled and the growth in the use of food banks is unprecedented,” slammed Inez.

“These cuts to the budget allocation and the implementation of these cuts will further increase the hardship experienced by the people of the North East.”

She pointed out that many people that work for Aberdeenshire Council and other public service providers are the sole earner for their household.

“With the budget cuts come the risk of cuts for jobs; a terrifying prospect for those who have already faced job losses in their households and this not only for the Council but for those who supply out public services within the third sector.

“We have to stand up and say enough is enough,” urged Inez.  “We are paying more and getting less.  Austerity does not work.”

Thanks and honoraria to our treasurer
The AGMs also approved the branch accounts and thanked our treasurer, Ann Gray for all her hard work over the year. The members who attended unanimously approved an honoraria of £1287.90 for the treasurer to reflect the work done in her own time to keep the branch in line with financial rules. Unfortunately, the AGMs did not reach a quorum. However the branch is notifying all members that we intend to pay this sum to the treasurer for the work undertaken throughout the course of the year.

If you have any comments on this, please notify the branch.

You are invited to attend the Annual General Meeting of the Aberdeenshire Branch of UNISON on 8th or 15th February 2017.

Branch Secretary Inez Teece said, “Whether we work for Aberdeenshire Council, a related employer or the voluntary sector, we have all had the challenge of change.

“Terms and Conditions, Pay, Pensions and the impact of Service Reviews have been the major issues we have faced.

“The key component for defending all these issues is membership participation, so we would urge you to attend the AGM and hear what UNISON is doing locally and nationally and be part of our decision making process.”

The guest speaker this year is Peter Hunter, Regional Manager, UNISON, who will provide a presentation on Fair Work in light of changing budgets etc.

Kate Ramsden, Branch Chair added, “The AGM is your chance to have your say on the issues of the moment and gives you a chance to raise issues or discuss concerns with Branch Officers.

“We very much hope that you will come along and look forward to seeing you there.”

A buffet and refreshments will be available at each venue and members of the Branch Committee will be on hand to answer any questions or just to chat.

If you wish advance copies of the papers to be tabled at the meeting, please contact the Resource Centre on 01224 620624 or e-mail GrampianResourceCentre@unison.co.uk

All branch members are invited to attend the branch aggregate 2017 AGM. 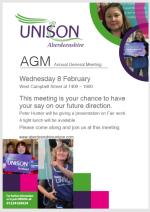 There will be a first meeting for our members in the Community and Voluntary Sector in the West of Scotland on Wednesday 8th February at 2-4pm in the UNISON Office, West Campbell Street with a light buffet provided

The local aggregate AGM will be held on Wed 15th February at one of two meetings.

The first will be held from 12noon to 2pm in Committee Room 4, Woodhill House, when a light lunch will be provided.

The second will be held from 6pm –9pm in the Kintore Arms, High Street, Inverurie, with a buffet & refreshments from 5.30Nominations are invited for Branch Officer posts. Click here for a brief outline of the duties of these posts.  Any nominations should be made using the pro-forma and returned to the Branch Secretary at the address on the form, no later than Friday 20 January 2017.

Nominations are also invited for stewards.  If you are interested in taking on the role of steward for your section/workplace/department but are not sure what it entails, then please get in touch and we can discuss this further.

Nominations for stewards should be submitted using the pro-forma, no later than Friday 20 January 2017.

PLEASE NOTE – IT IS ESSENTIAL THAT EXISTING OFFICERS AND STEWARDS –  WHO WISH TO CONTINUE IN POST – COMPLETE AND RETURN A NOMINATION FORM.

The final agenda will be issued no later than Monday 6 February 2017.

The Equalities Agenda, the Budget, the Future of Local Government and Pensions remain concerns for many of you.   This AGM is your chance to have a say on our future direction.  Come along and join us!  We hope to see you on 15th February at the AGM.