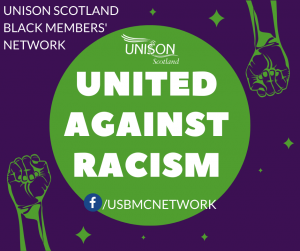 Aberdeenshire UNISON condemns the killing of George Floyd by police officers in the USA and stands in solidarity with all those demanding justice and an end to the terrible racism and inequality that underpins such acts.

We send condolences to George Floyd’s family and friends as we renew our pledge to fight racism in all its manifestations.

We encourage all our members to take action online to support the Black Lives Matters call for action against this terrible injustice. Please observe the current government guidance on lockdown.

Branch co-chair, Kate Ramsden said, “UNISON has a proud record of standing up to racism and this is a reminder of the need to redouble our efforts to end racism across the world as well as in Scotland.

“We only have to look at the death of Sheku Bayoh in police custody in Fife to know that Scotland is not immune to institutional racism. Five years on his family still await answers.

“The high numbers of Black lives lost in the Covid-19 pandemic and the health inequalities suffered by Black communities are other clear examples that racism remains a real problem in Scotland too.”

The branch  shares the outrage expressed by UNISON assistant general secretary Roger McKenzie when he said:

“The death of George Floyd has reminded the world once again of the racism that scars US society. It exists too in the shameful brutality of some police officers, whipped up further by the disgraceful actions of Donald Trump.

“That these are scenes still being witnessed in 21st century America is truly shocking. Black communities feel attacked on all sides – from the virus, the resulting mass unemployment and the appalling actions of the very people who are supposed to keep US citizens safe.

“But we must never imagine these are issues that America alone faces. The same racism exists in the UK and around the world.

“Growing economic inequalities in the wake of the pandemic could well spark an increase in racism. We must all be alert to that threat and stand up to abuse and discrimination wherever it surfaces.”

We also back the European Commission of Human Rights (ECHR) investigation into structural race inequality in the UK. Click here to see more on the UNISON General Secretary’s blog.