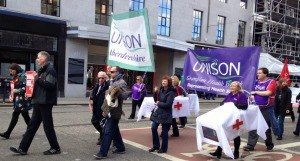 UNISON activists and the branch banner joined hundreds of trade unionists, community activists and politicians, four beds and three dogs on the Aberdeen May Day March on Saturday 30th April, calling for workers’ rights around the world.

It also called for the ARI Trauma Centre to stay open for the people of the North East of Scotland. 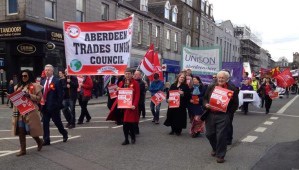 The march was led off once again by the uplifting beats of the Guarana Drummers, stopping at regular intervals to lead the marchers in a chant of “Save our NHS” – a reference to the campaign to save the trauma centre in the North East of Scotland.

Four UNISON members and activists representing  the Grampian Health branch had dressed up as beds to highlight the campaign to ensure that Aberdeen Royal Infirmary can keep its trauma centre for the people of the North East of Scotland.

Humphrey the basset hound brought UNISON health activist Sandra-Dee Masson on the march with him, where he was joined by two other politically active dogs!

Passersby once again stopped to watch and wave as the colourful procession of banners, placards and flags marched by on its exuberant way down the whole of Union Street to the rally in the Castlegate.