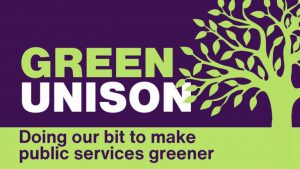 In the build up to COP26 in November, Aberdeenshire branch will join other UNISON branches across the UK to celebrate Green UNISON Week from 18 – 26 September.

Steve Gray, branch Green Champion said, “We will be stepping up calls for urgent action on climate change,  by celebrating, discussing and sharing how the union is working to green public services and to call for urgent action from politicians and employers.”

What can you do?

Sign the petition to demand that the UK Government back up their climate and nature pledges with up-to-date, ambitious legislation.

Steve added, “We are urging all our members to attend the UNISON lunchtime webinar on Thursday 23 September, 12.30-1.30pm. Members can register here. Speakers: Camille Barbagallo – Cop26 Coalition; Allison Roche – UNISON Policy Officer lead for Climate Change; Stephen Smellie – UNISON Scotland Deputy Convenor and NEC PDCC member. Chair: Karen Reissmann UNISON NEC PDCC Vice Chair. Find out more about what branches can do during and after Green UNISON Week and what branches can do to organise and support the November 6th COP26 Global day of Action for Climate Justice demonstrations and rallies in 10 cities across the UK.

“We also hope members will take part in UNISON’s green survey that will be advertised during the week itself.”

The branch will also be sending a message of solidarity and support to the youth climate strikers taking part in the global youth climate strike on Friday 24 September. See some info on the Fridays for Future Scotland website, including on a march in Glasgow, a rally at the Scottish Parliament in Edinburgh and a number of other events around Scotland. Unfortunately there are no plans for an event locally.

UNISON general secretary Christina McAnea said: “Green UNISON Week gives young people a global space to demand politicians take seriously the damage being done to our planet and act to save its future.

“To support young people’s demand, we’ll be encouraging branches to talk to employers on how they can reduce their own carbon footprints, but more importantly, ensure their employers have a plan to green their workplaces completely. That way we can all begin to make a big difference quickly.”

Anti-trade union laws mean that UNISON branches cannot take strike action, but there are many ways to show your support for the school campaigners and take part in Green UNISON Week. 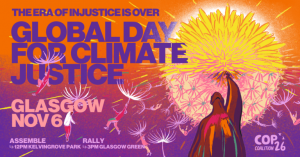 Mobilise for COP26
AND we will be building for a massive turnout of Scottish members at the COP26 Coalition Global Day of Action on Saturday 6 November in Glasgow. If you are interested in going along please email Steve Gray at grampianresourcecentre@unison.co.uk

There will be demonstrations worldwide on 6 Nov, including around the UK, demanding that the UN Climate talks in Glasgow deliver climate justice. UNISON members will be among many thousands of protesters for the vitally important march in Glasgow and at the rally, calling on world leaders to act now on the climate emergency.

Other branches across the UK are organising a week of activities on climate change and green workplaces, raising awareness and demanding action, as well as organising for COP26 demonstrations and more. UNISON Scotland’s motion at Special Delegate Conference stressed the importance of Green UNISON Week and COP26, and both feature on the current front page of Scotland in UNISON.