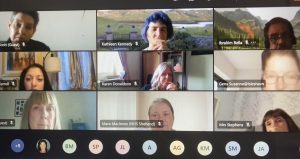 In the lead up to UNISON’s Year of the Disabled Worker, North East Branches came together to hold a well attended event entitled “Stepping Out: Tackling disability discrimination.”

The event heard from UNISON activists from Aberdeenshire, Orkney Local Government, Shetland and Moray. They spoke of the discrimination they had suffered or witnessed and how best to tackle this with employers.

The event which was chaired by Aberdeenshire UNISON Equality Co-ordinator, Kathleen Kennedy, began with a presentation from Katherine McKerrill of Orkney branch. She spoke of how the legislation underpinning efforts to tackle disability discrimination is not working.

“Although the 2010 Equalities Act incorporates lots of protections, a lot of work is needed if it is to be more than fine words,” said Kay, pointing out that the UN found grave and systematic violations of the rights of disabled people in the UK. She called for the UN Convention for the Rights of People with Disabilities to be incorporated into Scots law.

Moray’s Janis Donaldson spoke about her own experience of disability both within the community and the work place, with particular reference to her hidden disability, saying that “tackling disability discrimination is a cause close to my heart.”

Susanne Gens from Shetland branch spoke about the barriers to members disclosing to the employer that they have disabilities, often because of the attitude of managers. This can mean that they do not get the reasonable adjustments they need.

Aberdeenshire UNISON’s Clare Taylor Brown spoke very personally about her hidden disability and described two very different experiences – one where no additional supports were made available, despite requests; the second where she was listened to and recognised as the person best placed to identify the supports that she needed.

“Members need to be aware of the policies available to support them and to speak up. However this requires a culture of support,” added Clare.

Donna Scott, also from the Aberdeenshire branch spoke about her experience after her autism diagnosis. She said that instead of trying to find ways to help she was told no adjustments could be made and “if she could not do the job as is then she needed to find a different role. It would not be fair on colleagues to give me adjustments.”

“This experience has been both a disappointment and a shock, yet it also motivated me to leave and aim higher,” said Donna, adding that she is about to go to university to study for an MSc degree.

A question and answer session further showed the levels of disability discrimination which still exist in the workplace and in communities and it was agreed that education and awareness raising is key.

There will be a further meeting of interested UNISON members to plan the Year of the Disabled Workers and take forward action to tackle disability discrimination. if anyone interested in being involved please contact Kathleen Kennedy at Kathleenunison@gmail.com