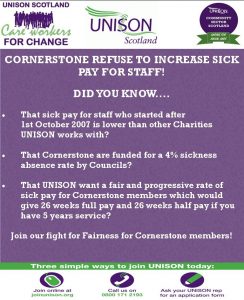 As you will know, part of our pay claim for 2018/19 focused on bringing your sick pay entitlement in line with other charities that UNISON work with. UNISON urges you to reject Cornerstone’s pay offer and to return your ballot paper as soon as possible. Their pay offer doesn’t address any of the concerns we have around sick pay, as explained below.

Our pay claim asked for:-

This isn’t unreasonable and is paid by Fair Work Charities like Enable Scotland, Quarriers, Capability Scotland, The Mungo Foundation etc.

When you look at Cornerstones turnover figures (the amount of staff who are leaving and needing to be replaced) for 2017/18, 7 of the 13 areas were in excess of the yearly target of 20.3%. North Lanarkshire and the Cornerstone Foundation were 40% or above, and Cornerstone Central Services was more than 33%.

This means that lots of staff aren’t entitled to any sick pay at all as they will have less than 1 years service – where is the incentive to stay with the Charity?

And did you know that Cornerstone are fully funded by Councils for a 4% sickness rate? UNISON believes that the money is there for fair sick pay.

UNISON is clear that we need Cornerstone to stand up and be a Fair and Decent employer. Make our hard working members a decent pay offer; introduce fair sick pay rates that the good fair work charities above already have; and demonstrate that you value our members by a reward strategy that covers all staff not just senior management.

Encourage your colleagues to join UNISON today at join.unison.org.uk