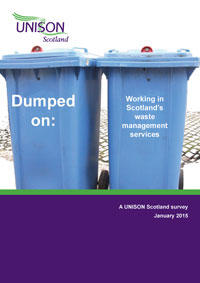 UNISON Scotland has put together a series of reports on how austerity is hitting public services and how we can protect them. Its latest “damage report” looks at our members in waste management in Local Authorities.

Branch Chair, Kate Ramsden said, “I am sure this will ring bells for members working in Aberdeenshire’s waste management service.

“The report tells a story of increasing pressure of work at the same time as the value of wages is decreasing. Members are having to work overtime to make ends meet.

“Like other local government workers those in waste management have suffered years of either zero or below average pay rises. In the UNISON survey, staff at all grades, even managerial, report having to make efforts to economise.”

Almost all of the manual workers who responded said that they took overtime shifts when they were available, many saying that they were an important part of being able to make ends meet. Levels of overtime worked were fairly high with reports of regular overtime being worked from four to 10 hours a week.

Kate added, “Needless to say, this decline in reward has not been matched with a reduction in expected effort. Quite the contrary, as new initiatives and declining staff numbers combine to make jobs more demanding than before.

“Vehicles are sent out with fewer staff – but the same route to cover as before. Others report the sharing of tasks amongst smaller numbers of start.”

The general picture is one of a workforce under pressure in and out of the workplace.

Kate said, “Just as worrying are the concerns about health and safety. Waste management and recycling ranks amongst the UK’s most hazardous occupations.

“The Health and Safety Executive (HSE) says between 2004/5 and 2011/12, it received reports of 97 workers and 19 members of the public being fatally injured – and 3,722 employees suffering major injuries – in waste and recycling activities, making it one of Britain’s most dangerous sectors.

“In a service undergoing rapid change as a consequence of both increased demand and tightening budgets was a lack of awareness of any risk assessments before changes and innovations have been introduced. Very few staff report even knowing about any risk assessment being undertaken before changes are introduced into their job – far less involvement.

“We would urge all non-unionised workers in waste management to join UNISON.”