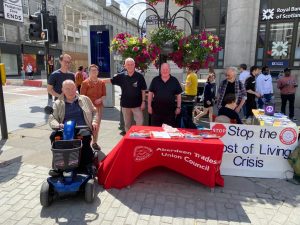 Branch members are  urged to come along to a protest in Aberdeen, organised by Aberdeen Trade Union Council and the Grampian People’s Assembly to  say “Enough is Enough” and demand action on the cost of living crisis.

Community groups, trade unions and campaigners will come together in Aberdeen on Saturday 1 October in Marischal Square, Aberdeen, from 11am to 12 noon.

The protest coincides with the hike in energy bills to £2,500 for an average family, and is one of many across the country on the same day.  Rising energy prices, rising food prices, and pay rises well below the rate of inflation (real terms pay cuts) mean  that thousands of families are being forced to choose between food and heating. Yet energy producing companies are making record profits.

Inflation (CPI) is currently 9.9%, but is significantly higher for low income households that spend a greater proportion of their income on energy and food. Most people in poverty live in a working household  https://www.tuc.org.uk/blogs/only-good-well-paid-work-route-out-poverty

Aberdeen TUC Chair Graeme Farquhar  said  ”Workers are paying the price for a crisis which is not of their making.  Most people in poverty now live in a working household, and any pay deal below inflation is a pay cut.  This is not acceptable or sustainable.

“Thousands of workers, everyday people who  kept society going through the COVID pandemic, are now being driven to take industrial action for a decent pay deal.  Their trade unions stand solidly behind them.”

Grampian Peoples Assembly spokesperson John Singer said   “We have seen the budget give major tax cuts for the rich, and withdraw a corporation tax rise.

“How can this be justified when food banks are running out of food, and families are living  in fear of the next fuel bill?  If there is enough money to help the rich and prolong wars, there is enough to look after the people of Aberdeen.  We need those running the country to change their priorities.”