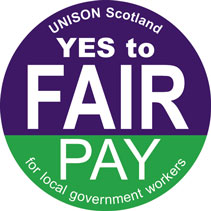 Over 85% of Scottish local government members voting in the pay ballot have accepted a two year offer with a new Living Wage deal. Staff will now get a 1.5% rise from 1 April 2015 and 1% from April 2016.

Importantly, the Scottish Local Government Living Wage of £7.85 per hour will be put in place before the 1.5% rise, making it £7.97 an hour.

Negotiators succeeded in getting the initial offer of two years at 1.25% front-loaded to 1.5% in 2015 which is above inflation and slightly increases the value of the 1% in 2016. In August inflation was 0.0% on the Consumer Prices Index and 1.1% on the Retail Prices Index.