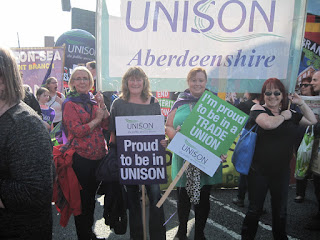 Branch delegates travelled to Manchester on 4th October to join the TUC march and demonstration against austerity and against the Trade Union bill, on the first day of the Tory Party Conference.

As the sun shone the marchers made a colourful display as they snaked through the streets of Manchester. The Tories meantime, hid themselves away behind a “ring of steel” – barriers and security to keep away real people. 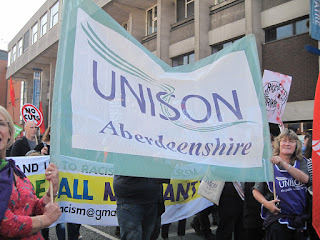 Kate Ramsden, Branch Chair said, “It was brilliant to see so many people speaking out with one voice against Tory policies which hit the poorest hardest but squeeze all but the richest in our society.

“The Tories have no idea about the suffering of ordinary people and they care less. For all their talk of being the “party of the workers” their policies hit workers the hardest.”

The Branch has pledged to fight attacks on workers through the Trade Union Bill and will be spreading the word to members and non-members throughout the council, about the threat to workers’ rights that the bill represents.

Inez Teece, Branch Secretary added, “We are delighted that Aberdeenshire Council and CoSLA are standing with us against this bill. Indeed the Scottish Government and all the political parties bar the Tories are opposing it in Scotland.

“We will be joining the lobby against the bill at Westminster on 2nd November and will be asking our MPs to meet with us and to stand with us against the Trade Union bill.”

This website uses cookies to improve your experience while you navigate through the website. Out of these, the cookies that are categorized as necessary are stored on your browser as they are essential for the working of basic functionalities of the website. We also use third-party cookies that help us analyze and understand how you use this website. These cookies will be stored in your browser only with your consent. You also have the option to opt-out of these cookies. But opting out of some of these cookies may affect your browsing experience.
Necessary Always Enabled
Necessary cookies are absolutely essential for the website to function properly. This category only includes cookies that ensures basic functionalities and security features of the website. These cookies do not store any personal information.
Non-necessary
Any cookies that may not be particularly necessary for the website to function and is used specifically to collect user personal data via analytics, ads, other embedded contents are termed as non-necessary cookies. It is mandatory to procure user consent prior to running these cookies on your website.
SAVE & ACCEPT