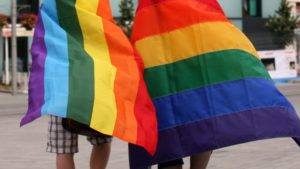 Do you have PRIDE in your union? March with us at this year’s Grampian Pride, on Saturday 26th May in Aberdeen, and stand in solidarity with LGBT+ colleagues, friends, family and their straight allies.

The branch will be supporting the Pride event in Aberdeen and we are encouraging all our members, friends and families to come and march with us.

Grampian Pride aims to bring the local and wider community together. Welcoming everyone from the North East of Scotland, the rest of the UK, and international communities. Grampian Pride aims to provide a safe space for all LGBT+ individuals and their straight allies. The Pride event will consist of a march, various stalls, information about LGBT+ organisations and services, entertainment, key speakers, safe spaces, and a family area. (Source: Grampian Pride)

The march is free but make sure you register online first as you will need your free ticket to get into the Pride Village!

Why should I support Pride?

Pride started as a protest. The parades and marches that we see now come from the protest marches of the first prides. LGBT people and their friends marched because it was commonplace for people to think that LGBT people shouldn’t be seen or heard and homophobia, biphobia and transphobia was endemic, so in protest against this, they demonstrated!

UNISON works tirelessly to combat homophobia, biphobia and transphobia and to build equality for us all. In recent years we’ve marched toward greater equality under the law with same-sex marriages and equalities legislation, but there is a long way to go in changing attitudes. The threats posed by continuing cuts and austerity, potential changes to human rights laws after Brexit, and a world where Donald Trump can become US President makes it an uncertain time.

UNISON continues to fight against discrimination at work and in wider society. We believe fundamentally in an equal and fair society for everyone.

(With thanks to our colleagues in Aberdeen City UNISON, who are also supporting this great event, for their text and their graphic.)