Inez Teece and Kate Ramsden were both in action at this year’s Local Government Conference – Inez in her role as Regional Delegate and Kate as branch delegate, from 18-20 June 2016 in Brighton.

Unfortunately the Branch Motion on Cuts and Political Strategy, although prioritised for debate, was not reached on the Agenda, so Ann Gray didn’t get to make her speech. And nor did Kathleen Kennedy, who had hoped to make her maiden speech at Local Government Conference on the motion on Homecare which was the very next on the agenda.

Local Government Conference slammed the Tory Government’s ideological austerity policies which are having such a devastating effect on local democracy and public services. It pledged to continue the fight to oppose these attacks.

Scotland’s motion was included in a wide-ranging composite which set out a comprehensive strategy for combating cuts, and was moved by Scotland Regional Delegate and Branch Secretary, Inez Teece.

Inez said, “None of us sat here today could have imagined the battles we would be facing in local government just 10 short years ago

“Battles that are the result of an ideology not a necessity, a choice that the current government are consciously making, choices that need not be made.

“Choosing to impose cuts on jobs and services, choosing to cut our vital wellbeing services.”

She told delegates that in Scotland we have already seen the impact of the loss of 40,000 jobs in local government, “with services pared to the bone, outsourced or privatised, community facilities closed, leisure centres and libraries with reduced opening hours and home care workers contact time with older people reduced to just 15 minutes per visit.

But, warned Inez, it is not just cuts and closures of facilities, but restrictions and rationing of what is left of our services.

“Services once universal for all now have eligibility criteria that excludes all but those in the most immediate and desperate need. Prevention services are stretched beyond limit and no longer prevent the problems they were envisioned to prevent.

“Criticism is heaped onto services when they inevitably fail in their desired aims, criticised for not having marvellous services with bells and whistles, whilst at the same time being given funding for a teddy bears picnic,” slammed Inez.

She asked, “When failures happen, what do we do?   Do we look at how we fund the services and how we provide them? No! We censure the staff, we reorganise and we sell off those services to private and voluntary agencies but this time with even smaller budgets.”

She told delegates that to fight this downward spiral, the local government committee in Scotland has embarked upon a concerted and coordinated plan to fight the cuts and to fight compulsory redundancies.

“We have developed an austerity toolkit for branches, to engage with their local authority in seeking to address some key financial issues where savings could be made, such as seeking to renegotiate the terms of hugely expensive PPP/PFI contracts.”

Inez added the Scottish local government committee has also  given full support to all and any local government branch that want to ballot and secure a mandate for industrial  action – action to fight for jobs and services.

“In UNISON we need to stand up and say ‘this has to stop’.

“But we activists cannot do this on our own, we need our members to engage with the campaigns and we need the public to engage with us, to believe us to trust us and to work with us.”

She called on UNISON to provide appropriate training, facilities and materials specific to our needs and that we can adapt to our local needs and situations. 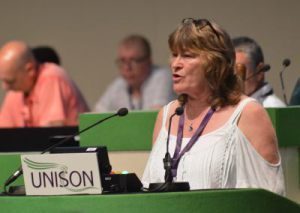 Conference supported a campaign to protect vital youth work services which have been devastated in recent years and are seen as an easy target for councils looking to make cuts.

Kate Ramsden Aberdeenshire Branch Chair, spoke in support of the motion and an amendment which called on the union to work with young people themselves to defend youth work services.

Kate shared the outcome of UNISON

Scotland’s survey of youth workers as part of the Damage reports which echoed the national picture.

“Our youth work members, like those across the UK, work hard to support young people to achieve their full potential through developing specific skills and self esteem, self confidence and resilience.

“Morale amongst youth workers in Scotland, as in the rest of the country is at an all time low.”

She highlighted the danger that youth work faced as an easy target for cuts despite being lauded as highly effective and important service by the Scottish Government.

“Just earlier this year, Angela Constance, then Cabinet Secretary for Education and Lifelong Learning in Scotland welcomed research valuing youth work in Scotland at £656m, with a return of £7 for every £1 spent.

“Unfortunately these warm words have not been accompanied by appropriate funding to continue to deliver such a valuable service.

Kate said that she particularly wanted to support this amendment because it called on us in UNISON to work with young people themselves to protect services.

Kate urged, “If we can find ways to include their real experiences in the campaign to protect youth services, if we can help them to tell how youth services make a difference to their lives and what it will mean when those services aren’t there it will have a much bigger impact than us banging the drum.

“Young people’s voices are not only powerful, it is empowering for young people to be able to speak out and to be listened to.”

She pointed out that youth workers have all the skills to give children and young people a voice and as a trade union we can help magnify that voice to make sure it is heard by managers, decision makers and politicians.

Kate highlighted the dedication and values of youth workers in supporting young people and fighting for social justice.

“It is only the passion and commitment that brought our members into youth work in the first place that keeps them going – and for many who see the impact of cuts on the young people they are working with – that too is ebbing away.

“Youth workers have all the skills to give children and young people a voice and to enhance the campaign for properly funded, high quality youth work services which make a real difference to the lives of our most vulnerable children.”

Who’s who and what’s what?

Service group conferences bring together members across the country doing similar kinds of jobs or working for the same kinds of employers. Our branch’s service group is local government. It has its conference just before the National Conference and in the same venue.

The delegation
The branch is entitled to send three delegates to this conference and must have regard to proportionality in line with the gender balance etc in the branch. We tend to have the same delegation as the Delegate Conference because of the distance to travel and the fact that one conference follows on from the other.

The Branch delegation to this year’s Local Government Conference in Brighton was agreed at the Branch Committee. Unfortunately Tricia Morrison was unable to attend so Kathleen Kennedy was approved at Branch Committee as her stand-in.

Regional Delegates: Two regional delegates are elected each year from the Scottish Local Government Committee. They speak to Scotland’s motions and amendments and they keep Scottish delegates right about conference matters. We are very pleased that for the sixth year in a row, our branch secretary, Inez Teece has been elected as regional delegate, along with Scott Donohoe, from Glasgow Branch.

Service Group Executive (SGE): Assistant Branch Secretary, Susan Kennedy is an elected member of the ruling body for UNISON’s Local Government Service Group, and she will take her place on the stage during this conference and will speak on behalf of the SGE. We wish Susan well for her second conference in this role.

Our branch submitted one motion to the Conference Agenda this year. The motion was approved at the Branch AGM in February and is titled Cuts and Political Strategy.

As delegates we will vote on the motions and the rule changes in line with branch policy, where we have that in place and we can speak for or against any of the motions, amendments and rule changes.