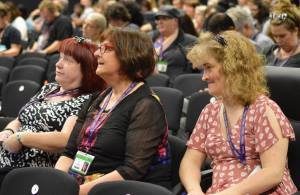 National delegate conference was characterised by good debate and a great deal of consensus as the union agreed strategies to challenge the right wing Tory government and their austerity policies, which all agree, hit the poorest hardest.

However, this year’s conference was overshadowed by the death of labour MP Jo Cox and an unexpected result in the EU Referendum – the narrow vote to leave the EU. UNISON had campaigned for a remain vote and most delegates seemed shell-shocked by the Brexit win.

There were calls for unity against the racism and hatred which had typified the EU Referendum debate. There was great sadness and shock expressed at the murder the previous week of Jo Cox, herself a UNISON member. Tributes were paid to her unstinting work for fairness and equality here and around the world and a book of condolences was filled with messages of support for her family and friends.

A highlight of a sombre week was Jeremy Corbyn’s speech to conference on the Wednesday morning. Clearly amongst friends, he was given a standing ovation as he came into the conference hall and his speech did not disappoint.

He told UNISON delegates to huge applause that a Labour government would immediately repeal the Trade Union Act.

“We would go further,” the Labour leader said. “We would strengthen trade union and employment rights. We would be a government that says that trade unions are a force for good and a force for equality in our society.”

Jeremy Corbyn urged delegates to vote to remain in the EU referendum, stressing the future of the NHS, the threat of the TTIP trade deal, environmental standards and climate change as key reasons.

“A vote to leave would put our NHS in jeopardy,” he said.

See the report of his speech on the UNISON UK website.

Branch Chair, Kate Ramsden, made two speeches at National Delegate Conference. Kate spoke in the first debate of the week as conference pledged to keep poverty at the centre of UNISON’s agenda and to continue its anti-poverty work across the union and across the four nations.

In her maiden conference speech, Kathleen Kennedy, Branch Equalities Officer, supported a South Lanarkshire motion, which paid tribute to the Scottish Young Members’ publication, Gonnae No Dae That? – a guide for young workers on bullying and harassment in the workplace and how UNISON can support them.

Kathleen told delegates that it is important for young members to know what is bullying is and where to get help.

Kate also spoke in support as Conference reiterated its clear support for a campaign of Boycott, Divestment and Sanctions (BDS) in support of a call from the Palestinian people for an end to repression and the right to self determination.

It will campaign for the repeal of laws like that planned by the Tory government which aim to silence support for Palestinian rights.

Kate slammed the intervention of the Tory government to introduce rules which will undermine the BDS campaign as truly despicable, but reminded delegates of the enormous power that we can exert on unjust regimes.

“The Tory government did nothing to bring down apartheid: that was down to us, the trade unionists and the ordinary people saying that we would not support an apartheid regime.

“That is why BDS is so important and why I am so proud that our union supports BDS. Israel is running scared of BDS and that tells us it’s making a difference.”

Every UNISON branch elects a delegation to attend annual conference and to vote on behalf of their local branch members. Scotland has about 200 delegates. This branch has three. Two must be women and one of these must be a low paid woman, to reflect the make-up of the branch.

Branch Committee voted this year’s delegation to Conference in Brighton as:

Susan Kennedy, one of our Assistant Branch Secretaries, will be a delegate to this year’s Annual Delegate conference from the Local Government Service Group, which is the national leadership in Local Government across the UK. Susan has been an elected representative on the SGE for four years now.

UNISON’s annual National Delegate Conference is the union’s ruling body. Every year delegates from all over the country take part in debates to choose our campaigning priorities and policies.

Conference is chaired by the UNISON National President, or by one of the Vice-Presidents. This year there are over 100 motions on the conference agenda again and a number of proposed amendments to the UNISON rules. Only a proportion of motions will actually be debated at Conference because there is not time to hear them all. Motions are therefore “prioritised”.

Branch motions and amendments
The Branch has submitted two motions to the Conference Agenda. Both were approved at the Branch AGM in February. They are: Anti Trade Union Bill Campaign and Administration of medications and medical procedures.

Our Anti Trade Union Bill motion has been ruled out of order by the Standing Orders Committee as “not sufficiently clear.”

Amendments to rule need to be approved by a two-thirds majority of the voting delegates. Card votes can also be called for (and often are) in rule changes. Thursday afternoon is traditionally the time that the rule changes are debated. Many delegates find this session really boring, but in recent years it has produced some of the best debates, and often the funniest speeches.