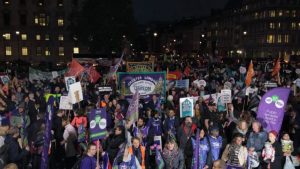 Branch Chair and NEC member Kate Ramsden joined thousands of people from our union and other unions as they came together in London and demanded change, an end to austerity and real pay rises for all public service workers.

Addressing the rally in Parliament Square, Dave Prentis, UNISON General Secretary told those assembled that this is trade unionism at its best, “United, single-minded and determined to change our country for the better.

Dave added, “We’ve suffered years of brutal austerity, vicious attacks on our public services and 600,000 jobs hacked away – all overseen by a government that does not care what damage it causes to people’s lives.

“In the first six years of Tory rule, public sector pay rose by just 4%, but the cost of living soared by 22%. And it’s getting worse. Inflation is now at 3% whilst UNISON members are still subject to a 1% pay cap. Every year under the Tories, they’ve faced a pay cut, and every pay slip a painful reminder of that fact,” slammed Dave.

“The care worker who can’t afford the bus back from work. The healthcare assistant walking home from their shift via the local foodbank. The teaching assistant, reliant on pay day loans to get through Christmas. These are not tales of pity or woe. This about real lives – the millions of people who care for us. Who ask for nothing more than dignity, respect and a fair share.”

But, said Dave, the tide has begun to turn.

To applause he said, “Together, united, we can break this immoral pay cap for all public-sector workers. All deserve the pay rises they’ve been denied. All deserve an end to attacks on their jobs, their services and their wages. The Tories will pay the price for their failure and for letting public servants down. And we will hold them to account for what they have done to public services – at the ballot box and every day until then.

“It’s time for the government to act – and Pay Up Now!”