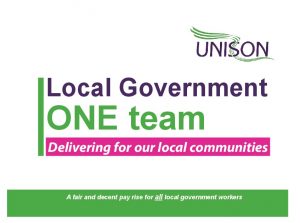 UNISON members in Aberdeenshire branch will be asked to sign postcards to COSLA President, Alison Evison, to highlight the vital role we play in delivering for local communities across Scotland and to press her on the principle of parity in pay across local government.

UNISON Stewards will be distributing these postcards to members in the coming weeks and we are calling on all our members to support this campaign for a decent pay rise for us all.

Branch secretary and UNISON Local Government negotiator, Inez Kirk said, “UNISON Scotland is now moving onto the second phase of our pay campaign involving all local government workers, asking each and every one of you to complete a postcard and send it to your branch to deliver to the leader of COSLA, the overarching body that represents local authorities.

Prior to the summer break UNISON met with the Scottish Finance Minister Derek Mackay about funding for local authorities and pay for all local government workers. We delivered in excess of 3500 postcards, many from our education colleagues in the branch, saying that education is one team and that all local government workers deserved a decent pay rise not just teachers.

Inez added, “UNISON wrote to John Swinney, Education Secretary, and asked him to consider all local government workers when considering a pay rise for teachers.

“We have waited for some time for a reply from John Swinney and as feared the response does nothing to give us confidence. We will be writing back to him to highlight errors in his letter.

“Our campaign is Local Government ONE TEAM. We have all suffered years of below inflation pay rises, we all have to pay more for the goods we need to live and we all work very very hard to provide vital services to the people of Aberdeenshire,  we all deserve the same pay rise, no group of workers should be treated differently to any other.”

Please watch out for and sign a postcard and tell CoSLA that after years of below inflation rises, we deserve fair pay and we should have the same pay rise as our teaching colleagues.