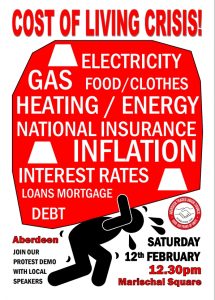 The branch is urging all our members and their families to get along to the Aberdeen Cost of Living crisis demo on Saturday 12th Feb at 12.30pm in Marischal Square.

Organised by Aberdeen Trades Union Council, the demo will protest against the cost of living crisis that will see soaring costs cripple already beleaguered working people and our most vulnerable citizens.

This is one of a large number of protests taking place around the UK against soaring hikes in the cost of gas, electricity and food.

Kate Ramsden, branch co-chair, who will chair the event, said: “We are urging our members and citizens of the North East to come together and give a clear message that these cost of living rises are totally unacceptable.

“Once again these rises will hit the poorest in our society and with below inflation pay increases, working people, including many of our members, will find themselves less and less able to cope. Poverty will rise and families will be forced to choose between eating and heating. In the north of Scotland that is a really stark choice,” slammed Kate.

“The measures proposed by the Tory government will do nothing to mitigate the impact of these cost of living rises on ordinary people. Yet again we are being made to pay the price whilst the rich get even richer.

“Despite massive profits by the energy companies, calls for a windfall tax have fallen on deaf ears.”

Energy regulator Ofgem has announced a dramatic rise in the energy price cap by 54% to £1,971 a year from this April in the UK – meaning that energy companies can now charge households across the UK around £2,000 a year for their gas and electricity use.

Other protests in Scotland have been organised by the People’s Assembly along with DPAC and Fuel Poverty Action. ATUC is proud to stand alongside them at our Aberdeen protest and shares their condemnation of increased costs at a time when the gap between rich and poor is widening exponentially.