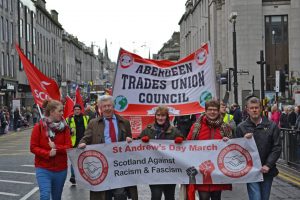 We are calling on all our members and their families and friends to join Aberdeen Trade Union Council’s (ATUC) St Andrew’s Day anti-racism and anti-fascism online rally on Saturday 28th November at 12.15pm.

Chaired by branch co-chair and ATUC delegate, Kate Ramsden, the event has an excellent line-up of local and international speakers as well as poetry and music.

Branch equalities officer, Kathleen Kennedy will speak on disability discrimination and there will be speakers on Black Lives Matter, the Scottish traveller community, a speaker on the fight against the rise of the far right, and international speakers on Turkey and Palestine. With poems and music, it promises to be an entertaining and also inspiring event.

You can join the rally on the Facebook Live stream

Acting ATUC President, Graeme Farquhar said, “It has never been more important to stand up against all forms of racism and discrimination.

“We have seen during the pandemic the disproportionate impact on our Black and ethnic minority workers as well as on other equality groups.

“However, we have also seen the rise of the Black Lives Matters movement and the powerful calls for an end to systemic and structural racism. To make this a reality we must confront our racist past and our involvement in colonisation and slavery. And we must include an honest account of this history in our children’s curriculum if we are to learn the lessons from it.”

“We will continue to stand against oppression, persecution and apartheid across the world and reaffirm both our solidarity with those communities that suffer and our pledge to highlight and oppose the actions of any country which acts to persecute and oppress, including our own.”

Kathleen added, “The ATUC will continue its work to end discrimination on the grounds of race, religion, disability, gender or sexual orientation as we face the challenges of moving out of the Covid pandemic.”