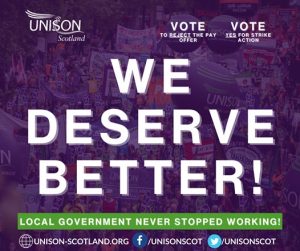 UNISON is beginning preparations for a formal industrial action ballot of our members in local government over pay.

The move follows a breakdown in negotiations with CoSLA on 4th May.   This is despite Cosla having been informed that UNISON members have voted overwhelmingly in an indicative ballot to reject CoSLA’s current pay offer and in favour of taking some form of industrial action in pursuit of an improved offer.

Local government workers have gone above and beyond in their response to the Covid pandemic – a fact which was underlined in the findings of their recent survey of members’ experiences over the past year – and deserve reward and recognition for their efforts.

Mark Ferguson, UNISON Scotland Chair of Local Government, said“It is unacceptable for our members to be used as a political football in a Holyrood election.  Our pay claim was submitted in December and the pay implementation date has come and gone – CoSLA could and should have resolved this before now.”

Inez Kirk, branch secretary and Vice-chair of Local Government added: “This is a deeply cynical political ploy from CoSLA Leaders who seem to be in denial about their responsibilities as an employer.  Whilst it is indeed the case the Scottish Government should put more money into local authorities we have been campaigning on that issue for over a year and they show no willingness to do so.  Against that background CoSLA need to make a decision about their priorities and their workforce deserve to be rewarded and recognised for their considerable efforts throughout the past year.

“Our members cannot take an industrial dispute with the Scottish Government because they do not employ them.  CoSLA is the employer and their failure to improve the current inadequate offer simply indicates they are intent on forcing that industrial dispute with a workforce that has spent the last 12 months working flat out on the frontline.”