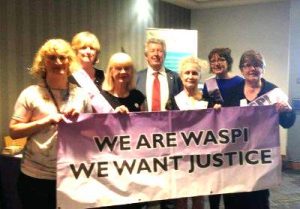 On Friday 26th May, Aberdeenshire UNISON members joined women from WASPI (Women Against State Pensions Inequality) on stalls at Woodhill House and Gordon House, to highlight the unfairness in the changes to state pensions for women born in the 1950s and to call for fair transitional arrangements to be made.

UNISON is strongly supporting the WASPI campaign as it affects a lot of our members now and in the future. 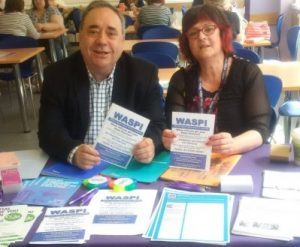 In Gordon House, UNISON’s Ann Gray was joined by the SNP candidate for Gordon, Alex Salmond, who also pledged his full support.

When women born in the 1950s started work, their expectations were that they would get a state pension age 60. The Tory government brought in an Act in 1995 saying that the women’s pension age would increase from 60 to 65 over a ten year period to bring women’s state pension age in line with men’s. This hugely impacts on women born in the 1950s especially if they planned to retire at 60. They now find themselves working to 65 or above.
The WASPI campaign does not oppose the equalisation of men and women’s pension ages. However for many women who planned to retire at 60 on the basis of getting their state pension at that date, this has created a great deal of financial hardship. The Tory government failed to properly advise these women of the changes and many affected women still don’t know that they won’t be entiltled to a state pension till they are 65.

WASPI’s  aim is to achieve fairer transitional state pension arrangements for all women born in the 1950s affected by the changes to the state pension law.

They do this through effective campaigning and teaching the public and lobbying politicians and raising the public awareness to get support for their campaigns.
Kathleen Kennedy said, “It is great to see our local politicians and General Election candidates support this campaign.
“We have to stop this from going any further. Women deserve fairness and they should not have to work on, or to scrimp and save to make up for not getting the state pension at 60 that they were led to expect.
This is yet another attack on women’s pensions,” added Kathleen. “Myself and another colleague in our forties often joke – will we ever get to retire?
“We need to ensure the state pension age doesn’t continue to rise for both women and men!”