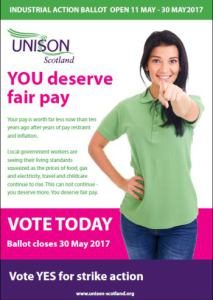 UNISON Scotland today announced the result of the Industrial Action ballot which closed yesterday with 62.7% voting in favour of industrial action. However the turnout was 22.8%.

Kate Ramsden, Branch Chair said, “As the turnout is below the 50% threshold, it is not possible to take industrial action under current legislation imposed by the UK Government.”

The employers have previously stated that they would be prepared to meet with the trade unions once the ballot had concluded and as a result UNISON will be seeking an early meeting to explore how pay can be concluded for 2017/18.

Inez Kirk, Vice-Chair of the Scottish Local Government Committee added, “The committee met in Glasgow this morning to consider the ballot result and were understandably disappointed.

“The ballot did return a vote in favour of taking industrial action but did not meet the requirements of the Trade Union Act 2016.