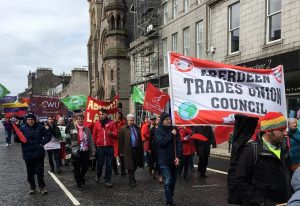 Branch activists and the branch banner joined trade unionists, community activists, workers, families, friends and dogs on the May Day March and rally in Aberdeen on Saturday 4th May.

The event was organised by Aberdeen Trades Union Council of wich the branch is an active member. 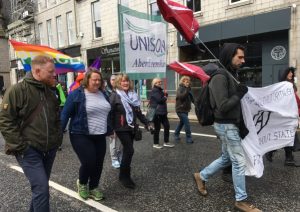 Although it was bracing weather for May, the upbeat rhythms of the Guarana Drummers kept spirits high, and the banners and flags made a colourful spectacle against the sleet gray sky. Passers-by, as always, stopped to watch and wave as the march snaked down Union Street.

The rally was moved from a cold, wet and windy Castlegate to the warmth of the Parkville Social Centre where marchers were treated to welcome and warming home made soup and great speeches calling for workers across the world to unite and defend hard won rights and equalities.

Branch vice-Chair, Kathleen Kennedy spoke at the rally pointing out that the cuts impact on all workers but hit disabled workers even harder.

“There has been £500 million cuts since 2010 and this has affected disabled people more than others, with the closures of day centres, the loss of access to work supports and cuts to home care.”

She told those gathered that one in five people have a disability in the UK and of those, half are out of work. 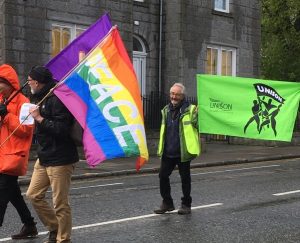 She added that those in work live in fear of more job cuts, and even if they keep their jobs it adds more stress.