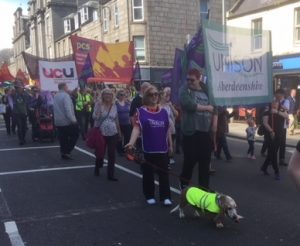 The sun shone and the marchers made a colourful and noisy spectacle as they paraded down Union Street to the upbeat rhythms of the Guarana Drummers. 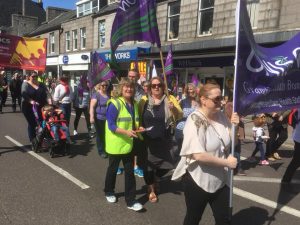 The crowds on Union Street stopped to watch and wave as the march passed by and marchers gave out leaflets bringing greetings from the ATUC in its 150th birthday year.

At the rally, compered by ATUC President and UNISON Equalities Officer, Kathleen Kennedy, a range of speakers highlighted the importance of workers’ and human rights here and around the world and called for greater equality and justice for all.

To read more about the event and to see videos of the march and the rally click here.