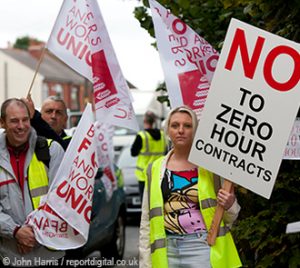 The Branch has urged Aberdeenshire Council’s elected members to work with the trade unions to defeat the Trade Union Bill currently under debate at Westminster.

Branch delegates will take part in a mass demonstration at the Tory Party Conference in Manchester on Sunday 4th October, to join our voice with all those calling for the Bill to be dropped.

The Branch has also called on all our members, families, friends and the public to sign the petition against the bill.

And to write to your MP calling for them to oppose it in parliament.

Inez Teece, Branch Secretary has written to all councillors calling for them to “help to prevent this Bill being enacted, by influencing your party, your constituents and both Holyrood and Westminster Governments.”

She warned that the Bill will, if adopted, introduce the most draconian restrictions on workers’ rights within the Western world.

“I believe if Trade Unions were restricted in such a way by the Trade Union Bill, local authorities would be more vulnerable because they would not have trade unions fighting alongside.”

The full text of the letter is below.

Kate Ramsden, Branch Chair added, “The Trade Union Bill weakens our voice at work, and weakens our campaigning voice. It undermines the right to strike, union organisation and aims to make it harder for unions to win a fairer deal at work.

“As Dave Prentis, UNISON’s General Secretary has said, “It is yet another malicious attack from a government determined to deny ordinary working people a voice at work. But it’s an attack we expected, and one we’ve seen off before. If we act together as one union, I know that we can rise to this challenge, build a stronger union and continue to speak up for our members.””

I am writing to you as Branch Secretary for Aberdeenshire UNISON and a concerned resident of Aberdeenshire, Scotland and Britain.

At present the current Westminster Government are proposing to introduce “The Trade Union Bill” which will, if adopted, introduce the most draconian restrictions on workers’ rights within the Western World.

I believe that in Aberdeenshire we have an excellent and mutually respectful way of working, achieving the best for both the residents of Aberdeenshire and the people that provide those services.
If the Bill is passed this relationship would be all but obliterated.  With restrictions to time and joining a trade union, representation etc., all of which would impact on Aberdeenshire Councils ability to carry out its business.

UNISON fights for public services and campaigns to defend those services.  We work with Local Authorities to promote the valuable services we provide.

I believe if Trade Unions were restricted in such a way by the Trade Union Bill, local authorities would be more vulnerable because they would not have trade unions fighting alongside.

I believe that in Scotland that no one wants this bill to be passed or come into force; we in Scotland have always had a more collaborative approach to industrial relations.

I would ask that you as political activists help to prevent this Bill being enacted.  By influencing your party, your constituents and both Holyrood and Westminster Governments.

The people of Aberdeenshire deserve the best of services and together we have done and can continue to do so if the Bill is defeated.