Aberdeenshire UNISON is calling on all our members to take action now to defend hard won trade union rights as part of a campaign to oppose the Trade Union Bill. Please wrote to your MPs and sign the petition by using the links below. It has never been more important to speak up before our voice is silenced.

And to take action by signing the petition against the bill.

UNISON is working with the other trade unions  to protect members’ rights by opposing the Trade Union Bill, which represents one of the most aggressive anti-trade union laws ever proposed in a Western democracy and restricts rights protected by international law in England, Scotland and Wales.

Taken together with the Lobbying Act and the introduction of Employment Tribunal fees in Great Britain,  the Bill is a further attempt to silence workers’ voices.

It seeks to restrict industrial action further than international standards permit, to limit peaceful protest and to subject unions and union activists to unprecedented levels of state scrutiny.

Public sector workers are subjected to further attacks on their facility time and on their ability to pay their subs by DOCAS or ‘check off’.

The Trade Union Bill goes for its first reading Monday 14th September in the Houses of Parliament with the intention of being approved by the UK Government on Monday 2nd November.
Steve Gray, Branch Development Officer has called on all Branch members to sign the petition and write to their MPs.

Steve said, “This is the biggest challenge facing trade unions and our members that we have ever faced. We need to act now.

“The headline is the right to strike but the imposition of a trade union regulator, fees on unions to pay for the regulator, power to impose fines for breaches of regulations, vetting and registration of trade union reps, prior clearance of all printed and social media press releases is very worrying for a democratic society.” 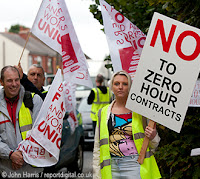 MPs will soon get their first chance to debate the government’s controversial trade union bill, as it receives its second reading in the Commons. It’s an important chance to raise early objections to this divisive legislation.
“We need to brief our MPs so they know that their constituents have expectations of them, and are watching their actions.”

Steve warned, “New measures in the bill, being introduced at the same time would fundamentally damage the right to strike in the UK. Employers would be able to use agency temp workers to break strikes. Heavy new restrictions would be placed on peaceful protest and picketing.

“Unprecedented extra hurdles would be placed in front of strike ballots. And the government would have powers to restrict the work of union safety reps and shop stewards in the public sector, and to make it harder for unions to collect subscriptions.

“All in all, the bill seeks to hand all power in the work relationship to the employer, by restricting and weakening workers’ power to challenge injustice.”
The second reading will be Monday 14 September, and the government are keen to rush this through as quickly as they can.