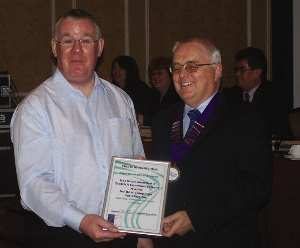 The branch has won the 2006 Scottish Communications and Campaigns award for the best campaign, for our campaign around Equal Pay compensation for our low paid mainly women members who were not paid bonus.

Bob Revie, Branch Secretary, collected a framed certificate and £250 on behalf of the branch, from UNISON’s national president, Malcolm Cantello, at December’s Scottish Council. The branch will also get to use the Scottish Communications and Campaigns award logo on all our publications for this year.

“I am delighted that the branch has won this award,” said Bob. “It is a tribute not only to the branch officers and full-time staff who planned the campaign, but to all the branch activists who got involved. We couldn’t have done it without their support.”

The campaign was set up to make sure that our members knew about their rights to equal pay and what the branch was doing to make sure they got this; and to give advice to members who were made compensation offers for pay inequality. To do this, the branch sent out briefings, attended all of the council’s signing days to provide advice and support , trained activists on the equal pay issues, and briefed the local press.

As a result, the branch has lodged grievances on behalf of over 100 of our members to protect their rights to compensation. Many of those members have recently received improved offers. We have gained 6 new workplace contacts and our membership has increased by 10%. We have also met many more of our members and you had the chance to talk to branch officers and stewards.

These are the comments of the three judges, Chris Bartter, Scottish Communications Officer, John Stevenson, Chair of the Communications and Campaigns Committee and Jane Carolan, Scottish NEC Member

Every entry in this year’s competition reflected hard work, imagination and a real commitment to the lifeblood of UNISON organisation – communicating with members. The marking took into account the resources available to branches and the frequency of publications. Even after all that, the competition was very close with often very few marks separating the entries. There have to be winners but all entrants should be proud of the work produced.

This was a hugely difficult award to judge with the top three separated by only seven points. What the judges wanted to see was planning, co-ordination and involvement – along with actual achievement.

Campaigns on complex service conditions issues like this need a clear strategy, detailed planning and training for activists. All of these are present in this entry. Decisions about the campaign are taken alongside negotiating and organising decisions which is a key issue that the Strategic Campaigning Course highlights.

Communication with members, briefings for activists and a media strategy went hand in hand with negotiation and consultation. The campaign relied on engaging active involvement of all the key players in the branch. There were exceptional geographical issues which were addressed at an early stage. The process of briefing activists to give them the tools to respond to members was key to the process. There was a strategy for communication at each stage of the process and this was regularly reviewed.

Competent and workman like campaign Well thought out and properly planned shows that this sort of campaigning can have results – even on difficult issues. Targeting, aims etc all identified and a debrief identified the way way forward – next stop – single status.

Briefings from the negotiators were refreshingly in plain English and managed to put complex issues in understandable terms not only for members but also for activists to cascade to members. The material for activists’ briefings was excellent, giving them ‘scripts’ and Q&As to answer members’ queries. National material was well adapted for local use.

Use of the magazine was good although stories could have been given more prominence with bigger headlines. Nevertheless, the use of different officers and a full-time officer to cover Single Status issues gives a good impression of everyone pulling together and highlights the importance of the issue.

The use of the media was excellent in putting UNISON’s position and getting information to members. Equal Pay is a minefield in terms of what should or should not be said (re litigation) and the complex was put into easily understood quotes. The use of the website is not specifically referred to in the entry but links are made via the magazine and the website reflects the bulletins.

Good use of meetings/handouts/F&Qs/Magazine and Press. No info on website use, was it considered? Handouts might have been more attractive, but I bet they were read! Contact /Recruitment details should have been more prominent.

A 10% membership increase is a very significant success as is six new contacts in previously unrepresented areas in a branch this size. Couldn’t be more relevant or topical. Would have liked to have seen recruitment more clearly targeted – but successful anyway despite this!

The objective of involving and informing members is reflected in the number of claims and approaches at roadshows. There must have been spin offs in presenting the union as active and relevant through this, the bulletins, press coverage and website. This was a good example of the nuts and bolts organisation, planning, objectives and communication that is essential to effective union activity. This was delivered through thought being given to the process, a clear focus and hard work and involvement of activists in partnership with employed staff.