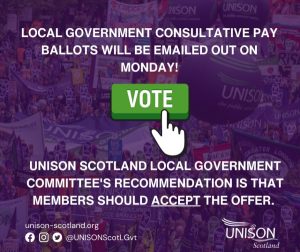 The consultative ballot on the revised Local Government pay offer went on Monday 8th November and will run till Monday 29th November.  Please make sure you complete and return your email ballot.

All members in councils are being asked to vote on a revised pay offer from COSLA, the employers. The offer, which backdates the original pay offer to January instead of April, puts an extra £48 million into the hands of workers, and has been made in the face of threatened strike action by janitorial, catering and cleaning members in schools in five local authorities, including Aberdeenshire. This action has been suspended pending the outcome of the consultation.

The details of the offer are:-

• An increase in the Scottish Local Government Living Wage (SLGLW) hourly rate to £9.78.

• A back dating of the implementation date of the pay award and the increase in the SLGLW to 1 January 2021. To be clear this takes the value of the flat rate increase from £850 to approximately £1,062 in the year 1 April 2021 – 31 March 2022. While it is acknowledged that the backdating element of the increase is non-recurring it equates to a 5.89% increase in the year for those earning at the current SLGLW rate.

The UNISON Scotland Local Government Committee is recommending acceptance on the basis that it is an improved offer especially for those earning below £25K. However it is for members to decide.