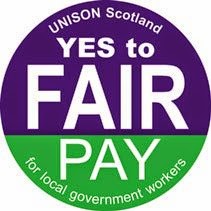 The Scottish Local Government pay ballot closed yesterday with members voting 70.8% to accept and 29.2% to reject the revised pay offer.

The Local Government Committee meets on 5 November, after which a further update will be circulated.

Commenting on the ballot result, Kate Ramsden, Branch Chair said, “Members have recognised that it has been a significant achievement on the part of our negotiators to get the employers back round the negotiating table, after years of imposed pay awards.

“The commitments around the living wage also represents a significant step forward, albeit in a longer time frame than we would have wished for our members.

“Clearly the 1% pay rise is paltry and leaves our members up to 16% worse off in real terms. This has been especially hard for our low paid members many of whom are still dependent on benefits and some also on foodbanks, which is a disgrace in our wealthy society.

“We now need to build for a much better pay rise for us all next year, particularly for our low paid members. That makes sense for us but also makes sense for the economy as a whole. We are the people who pay our taxes and who shop in our local communities. Paying us properly has a big knock on effect for local shops and businesses, as well as for deficit reduction, which is what this UK Government says it wants.”