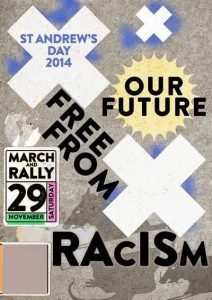 We are encouraging all our members to join us at the ATUC organised St Andrew’s Day March and Rally, to give a clear message that racism and fascism are not welcome here in Aberdeenshire.

Kate Ramsden, Branch Chair, who will be chairing the Rally as Vice President of the Aberdeen Trades Union Council said, “The St Andrew’s Day March opposes racism in all its forms and celebrates diversity.

“The particular theme this year is Anti-Apartheid, because it is 30 years since Aberdeen gave the Freedom of the City to Nelson Mandela.

“It is also UN Day of Solidarity with Palestine, a country still suffering from Israeli apartheid. Hopefully Aberdeen City Council will be flying the Palestine Flag that day.”

11 am Assemble at St Nicholas Churchyard. Look out for the branch banner and join us to march behind it.

11.30am March down Union Street

12.15pm Rally at the Castlegate

There will be speakers from Trade Unions, Community Organisations and Political Parties at the Rally.