The branch is urging members to join the TUC March and Rally on 18 June, in London, to tell this government: we DEMAND better.

The STUC has chartered a train to London to join the March and UNISON has been allocated 120 seats.

Five seats are available to our branch at a cost of £90 each (return fare) which will be met by the branch. If you need travel down to Glasgow, the branch can also meet this cost. Contact katearamsden@gmail.com if you are interested in a seat.

The train will depart Glasgow Central at approx. 6am on Saturday 18th, returning at 6pm from Kings Cross.

Conference delegates who wish to stay over for the TUC March can book the return fare only. Luggage can be stored at UNISON National Centre in Euston Road from early Saturday. 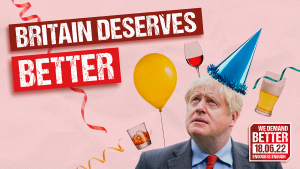 Christina McAnea explains why your branch should be there as part of a sea of green and purple demanding better.

Kate Ramsden, Branch co-chair said: “Working people have had enough. Everything’s going up but our wages.

“Ministers have dithered and delayed whilst living standards have plummeted. Costs of food and fuel have soared whilst energy companies make billions in profits.

“Well, enough is enough. It’s time for a new deal for working people. We need help with energy bills and a real pay rise for every worker.

“Let’s take matters into our own hands – and get out on the streets.”

On 18 June, in London, let’s tell this government: we DEMAND better. 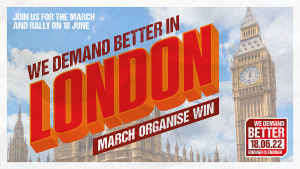 And more than that: we demand a government that listens and acts to support working people.