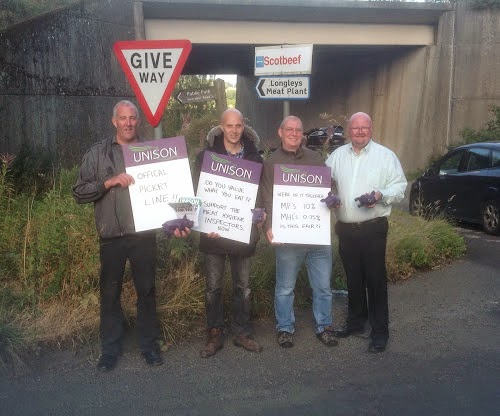 This follows a ballot earlier this month, which saw UNISON’s Food Standards Agency (FSA) members overwhelmingly vote for strike action over an imposed pay offer of just 0.75%, while most other public service workers have been offered a 1% increase.

UNISON has previously invited the FSA to resolve the pay dispute through independent conciliation. Even as late as last week, UNISON asked them to reconsider and go to ACAS for arbitration, but they refused.

Kate Ramsden, Branch Chair said: “Our Branch is one which hosts members in the Food Standards Agency Sector. We stand fully behind our members’ action.

“There was a good response too from farmers and others at the meat inspectors’ picket line at the Scotbeef plant in Bridge of Allen. Like us they recognise how important out meat inspection team is to public health. 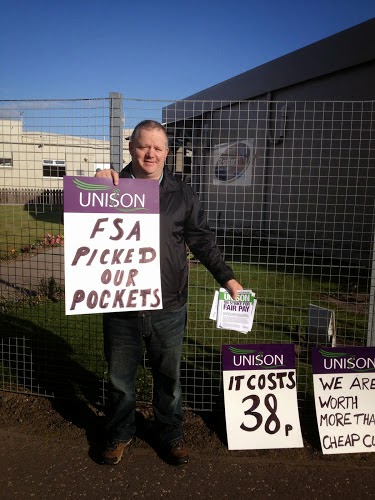 “Meat inspectors, official veterinarians and support staff cost each person in the country just 38 pence per year. When you consider that since April 2012, they have prevented over a million instances of diseased animal carcasses from entering the food chain, it’s a small price to pay for safer food.

“Staff in slaughterhouses work in some of the most dirty, difficult and stressful conditions, surrounded by blood and faeces, to keep the public safe from contaminated meat.

“To add insult to injury, they are not even being offered the miserly one per cent increase that has been offered to other public service workers. These workers should be recognised for the vital role they play in safeguarding the human food chain against harmful and repulsive dirt and diseases – they deserve a fair pay rise.”

This website uses cookies to improve your experience while you navigate through the website. Out of these, the cookies that are categorized as necessary are stored on your browser as they are essential for the working of basic functionalities of the website. We also use third-party cookies that help us analyze and understand how you use this website. These cookies will be stored in your browser only with your consent. You also have the option to opt-out of these cookies. But opting out of some of these cookies may affect your browsing experience.
Necessary Always Enabled
Necessary cookies are absolutely essential for the website to function properly. This category only includes cookies that ensures basic functionalities and security features of the website. These cookies do not store any personal information.
Non-necessary
Any cookies that may not be particularly necessary for the website to function and is used specifically to collect user personal data via analytics, ads, other embedded contents are termed as non-necessary cookies. It is mandatory to procure user consent prior to running these cookies on your website.
SAVE & ACCEPT