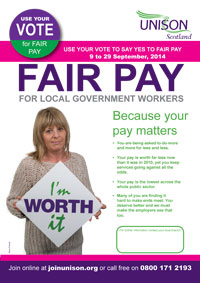 UNISON Scotland is balloting all its council members on strike action for fair pay. Ballots were sent out from 9th September and the Branch is encouraging all our members to vote and to vote YES.

Inez Teece, Branch Secretary and member of the Scottish Local Government negotiating team explains the background to the dispute.

“The Scottish Employers have imposed a pay award of 1% on our members from 1 April 2014.

“Further they have refused to negotiate on UNISON’s claim for this period which was:

“This action by the employers is quite unacceptable and shows a blatant disregard for the agreed bargaining structures and threatens the future of nationally agreed pay awards.

“Given that the employers imposed 1%, it is unsurprising that they also refuse to negotiate on a justifiable pay claim.

“The ballot asks members whether they are prepared to take strike action to force the employers to respect the joint negotiating machinery and return to the negotiating table and improve upon the offer.”