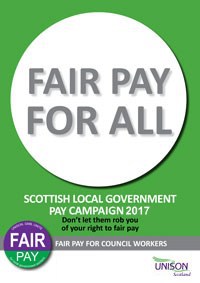 UNISON will ballot 70,000 local government members across every local authority in Scotland on industrial action.

The decision was announced at UNISON’s local government committee meeting on Monday following a consultative ballot which saw 77.6 per cent vote to reject the employers’ pay offer.

Dougie Black, regional organiser for UNISON Scotland, said: “Local government workers have suffered years of pay restraint and their pay is worth far less now than ten years ago. The cost of food, gas and electricity, travel and childcare continue to rise and, as a consequence, their living standards have been severely eroded. This can not continue.

“Fair pay remains a priority for UNISON. Our members are the cogs that keep local government services turning and they deserve to be treated fairly.”

Mark Ferguson, Chair of the Local Government Committee added, “The result of the ballot on SJC Pay resulted in an overwhelming rejection of the employers offer.

“The Local Government Committee met to consider this result and unanimously agreed to pursue a further ballot for industrial action to seek to force the employers to make an improved offer.”

A Branch Secretaries meeting will be organised w/c 17th April at which further details of the consultative ballot outcome and the arrangements and campaign for the formal industrial action ballot will be outlined.