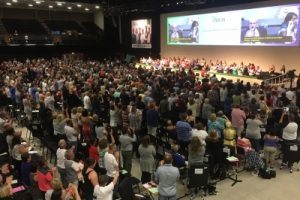 The cloud of the tragic events in London and Manchester hung heavy over this year’s Conference.

The aftermath of the Grenfell Tower fire, whatever the causes, threw into focus the reality of the divide in a Tory UK between obscene wealth and inexcusable poverty.

The need to address that was reflected in policies we set on breaking the pay cap, on campaigning for decent public services, on housing policies and on a decent living wage that is actually enough to live on.

Equalities too was high on the agenda. One of the most moving bits of any Conference is when people who are directly affected have a personal story to tell. There was much of that in this debate. The pain of the stories was matched only by the courage of the delegates telling them.

But there was optimism too. The outcome of the General Election left us all with hope that there is an end to austerity in sight. The Labour Manifesto, so heavily built on the policies that UNISON has been calling for since 2010 and before, gave a more upbeat feel to this conference than has been in evidence for a long time. And Jeremy Corbyn’s wonderful speech as he addressed UNISON conference was the icing on the cake.

“The politics of hope will always overcome the politics of fear,” said Jeremy to cheers.
Asked about his priority in government he told us that it is first and foremost to sort economy to reduce inequality and invest in public services; a plan to build more houses; proper funding for health and social care and education.

Branch delegates did not get into the debates this year but both Susan Kennedy, Asst Branch Secretary, there representing the Local Government Service Group Executive; and Kathleen Kennedy, Branch Equalities Officer, representing National Disabled Members were at the podium.

Scotland’s Kathleen Kennedy, supported the motion on behalf of Disabled Members, referring to her own experiences.

There must be support for members living with mental ill health

Moving the motion on behalf of the National Disabled Members Kathleen Kennedy told delegates that one in four people experience mental ill health at one stage in their lives and yet mental health is still a taboo subject.

“There is still a lot of prejudice and lack of understanding around mental health, which means that many people don’t feel comfortable disclosing their mental ill health.

“It is vital that anyone with mental ill health is able to get the support they need, without fear of judgement or discrimination, and that mental health is treated equally with physical health.”

Scotland’s Susan Kennedy, speaking for the Local Government Service Group supported the need for UNISON to provide dedicated Mental Health Champions to support our members, activists and delegates at conference.

Susan said, “This week at both Local Government and National Delegate conferences we have all witnessed the impact of government cuts. Cuts which bear relation to increased workplace stress and mental health issues.”

Scotland’s Susan Kennedy, speaking on behalf of the Local Government Service Group Executive told delegates that UNISON supports the TUC’s ‘Dying to work’ campaign and the call for all of us to promote and campaign to force the employers to sign up to the ‘Dying to Work Charter’.

“The choice to remain in work or not should sit with the individual…NOT with the employer,” said Susan, condemning employers who increasingly and unfairly force our members with terminal illnesses out of a job through their capability policies.